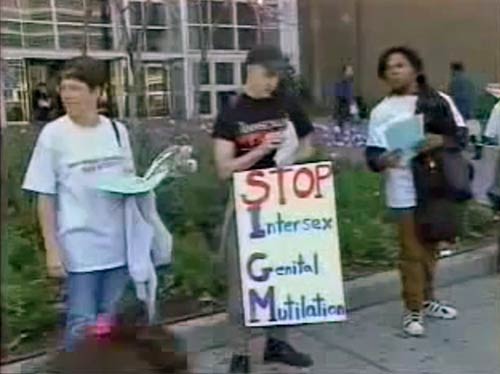 ‘The risk of malignant change is not as great as has been suggested. […] Castration upsets a state of biological equilibrium that has been built over a long period of time. Since most of these patients have normally or even very well developped […] sexual feelings, it is very difficult to restore this ideal state by replacement therapy.’
– Georges André Hauser, 1961/1963 (see below 3.)

Doctors and clinics treating intersex ‘patients’, especially paediactric endocrinologists and their departments, still propagate and perpetrate so called ‘prophylactic’ castrations a.k.a. gonadectomies on CAIS ‘patients’ (Complete Androgen Insensitivity Syndrome, i.e. people developping a female appearance due to their bodies not reacting to testosterone at all, despite XY caryotype and having mostly undescended testicles producing testosterone, which then is made into estrogens by the body, hence the female appearance).

The rationale behind these medically unnessesary castrations with all their ‘unpleasant consequences’ (Hauser, 1961/63, see below 3.) is a) an alleged ‘high cancer risk’, and b) ‘psychological distress’ of the ‘patients’ (that were and still are told by doctors to be ‘normal women’ with ‘malformed ovaries’), or rather the parents and doctors themselves.

Due to organised criticism by self-help groups during the 25 years leading to ‘new’ assessments of the alleged cancer threat (e.g. Cools et al. 2006 stats | fulltext; Looijenga et. al. 2007 stats | fulltext; Pleskacova et al. 2010 stats | fulltext), there have been some recent positive developments exposing the ‘high risk’ as a convenient and profitable lie by doctors (which has been known and criticised by insiders since at least 1956, see below 3.).

However, many doctors and clinics are still selling the ‘high cancer risk’ lie, and continue to propagate and perpetrate harmful, medically not necessary castrations.

2.  Examples of Doctors, Universities, and Clinics
Represented at the ‘9th Joint Meeting of Paediatric Endocrinology’
and Recommending ‘Prophylactic’ CAIS Castrations:

‘In the first case [PAIS = Partial AIS] it’s often possible to assign the male gender, to correct the atypical genitalia surgically and prescribe a hormone therapy. In the second case [CAIS] it’s necessary to assign the female gender and in puberty we recommend removing the gonads.’

‘Gonadectomy should be performed because of the increased risk of testicular tumours, although a recent study showed that tumor risk is low in CAIS patients before and during puberty.[64] We favour prepubertal gonadectomy, after diagnosis, and then induction of puberty with oestrogens at the appropriate age.This approach diminishes the time that the girl has an inguinal mass and surgery is better handled psychologically by a young child than an adolescent. However, the optimal timing for gonadectomy in CAIS patients is controversial and some authors advise to postpone gonadectomy until after spontaneous breast development at puberty.[65] In our experience, breast development is similarly obtained with endogenous oestrogenization or with pharmacological replacement.’

c)  Innsbruck, Austria – The Medical University of Innsbruck:
The University’s Paediatric Departement is represented 3 times within the programme of the ‘9th Joint Meeting’, though with non-intersex topics. However, e.g. the University’s Pediatric Course of Winter Semester 2011/12 (PDF) [ TRIGGER WARNING!!! ] teaches on p 28 (translated from German):

‘Therapy:
∙ leaving the gonads until the end of puberty
∙ physiologically female development of puberty
∙ thereafter removal of the gonads because of cancer risk
∙ substitution with estrogens and gestagens’

And these are just three random examples! As a rule of thumb: Scratch any presenter at the ‘9th Joint Meeting’, and you’ll find mostly a personal perpetrator of Intersex Genital Mutilations, or at the very least a genital mutilators’ clinic/university!

3.  Unnecessary and Harmful: Medical Criticism since at least 1956

The well-known surgeon and endocrinologist Georges André Hauser (1921-2009), one of the name patrons of the Mayer-Rokitansky-Küster-Hauser Syndrome (MRKHS), was probably the most staunch criticist of CAIS castrations since at least 1956, i.e. before systematic castrations became a de-facto medical standard – despite that even then it was well known, that castrations were not medically necessary, but indeed harmful.

In the influential 1963 medical textbook ‘Intersexuality’ (edited by Claus Overzier, German editition 1961), G. A. Hauser contributed a chapter on ‘Testicular Feminization’, as CAIS was called then. There he criticised the castrations unmistakably, denouncing the medical myth of ‘High Cancer Risk’.

‘d) The castration of patients without a tumour converts symptomless individuals into invalids suffering from all the unpleasent consequences of castration. […]’

‘e) Castration upsets a state of biological equilibrium that has been built over a long period of time. Since most of these patients have normally or even very well developped breasts and sexual feelings, it is very difficult to restore this ideal state by replacement therapy.’

‘f) Other autors state that they remove the gonads, because they do not correspond to the external, psychosocial and psychosexual sex of the patients. This is a costly mistake, because these gonads produce estrogens. […]’

So, despite that the medical community has known very well and for a long time about the exaggerated ‘high risk’ and the negative consequences, they did (and still do!) preach medically not necessary, harmful castrations on vulnerable patients none the less!