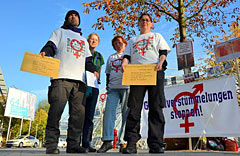 […] Furthermore, we are deeply saddened to learn that the dissemination of systematic cosmetic amputations or excisions of clitorises considered ‘too big’ on children in europe is  inextricably linked to both ESPE as a society from its very beginning as well as to prominent individual members like e.g. Andrea Prader or Jürgen Bierich, and that they both are praised and immortalized by scientific prizes bearing their names given out in part by ESPE, despite the fact that e.g. the latter stubbornly advocated clitoral excisions on the basis of ‘scientific proof’ that the removal of a functioning clitoris would cause ‘no harm’ to the persons ability of experiencing orgasms. [1] While we recognise the medical achievements of both ESPE and its members, we feel it is intolerable to not also acknowledge their errors and the lifelong suffering they caused to the people concerned. We feel it is long overdue for ESPE to start a process of coming to terms with the past in order to be able to working towards a better future not tarred by unnecessary suffering and grave human rights violations. […]    >>> Fulltext