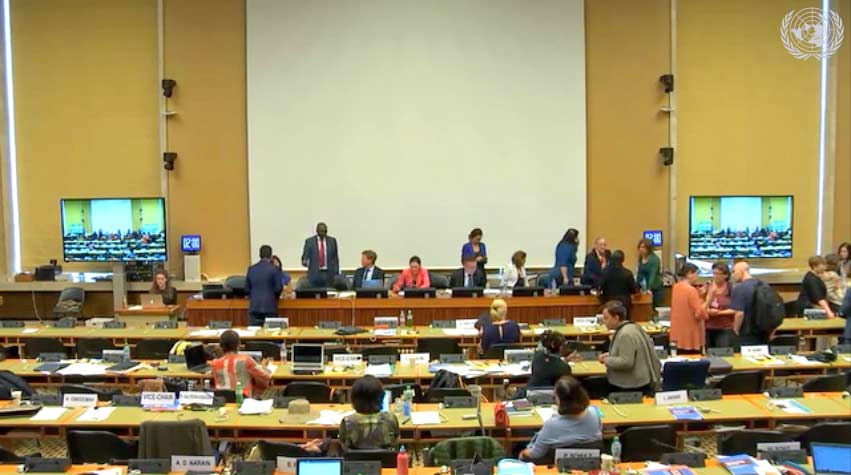 UN-CEDAW 70th Session @ Palais des Nations, Geneva 06.07.2017: Getting ready …
On the right (below the screen): Madame Arocha, who asked the question on intersex,
discussing with Daniela Truffer and Markus Bauer (StopIGM.org)

StopIGM.org, Brújula Intersexual and Vivir y Ser Intersex, with the support of Adiós Al Futuro and Intersex y Andrógino, Yo Intersexual and Eva Alcántara presented a comprehensive NGO Report on the Situation of Intersex People in Mexico to CEDAW (2018), which demonstrates that intersex genital mutilation practices continue to be carried out in public hospitals in Mexico, and on 05.07.2018 briefed the Committe with a Joint intersex Statement.

During the 70th Session of the Committee on the Elimination of Discrimination against Women (CEDAW), Mexico was questioned about Intersex Genital Mutilation – and while the Delegate didn’t reply to the part of the question about “punish[ing]” perpetrators, she at least was honest about the persisting practice:

« We know that it is an issue that we still have the task of reaching the base of the national health system, disseminating and eliminating the practices that are persisting, both in counseling and in the performance of surgical interventions in this regard […] »

>>> VIDEO: Watch the entire Session in Spanish and English on UN Web TV

Ms. Magalys Arocha Dominguez (CEDAW Vice-Chairperson and Head of Task Force for Mexico) (Video @ 1:03:47) raises intersex and IGM together with other examples of violence in health care settings.

Unofficial Transcript (based on the original Spanish one):

« Thank you, Madam Chair, with your indulgence, because I really did not have time to include a question I had, which is actually a follow-up to something we have seen since the morning, which has to do with the intersectionality of discrimination in general; and in the case of health in particular, the situation that certain groups face with the health services themselves.

There are things that I do not like to ask under the health article, because in fact there are certain groups, especially disability, the problems of the LBTI community, which are generally medicalised, are seen from a very medical point of view, as problems of disorders…. and that should not be the approach, it must be a human rights point of view, therefore, receive my question as a concern in this area, but it must be seen in a more general framework, there in articles 1 and 2, where this was briefly mentioned this morning.

I would just like to ask if in the health services… what has the Mexican state done, if there are resources for this, if there is training for medical personnel in general for care, first of all for the groups of women with disabilities in general, and in particular indigenous and Afro-descendant women with disabilities who are often more vulnerable to access to health services, and this access to comprehensive health care, as an issue that also has to do with the development of their capacities, of their potential, and not only of people with a degree of disability, in a degree of exclusion from social life, and the issue, above all, of an informed, inclusive sexuality that also recognizes that people with disabilities have these rights. So I would like to know what progress has been made, what the limitations are, where we are going in Mexico on this issue.

And a next issue has to do with this same approach to the LBTI population, which yes, we are talking about the LBTI population but the needs of lesbian, bisexual, transgender and intersex women are completely different, including in the health field and in other areas. But in the health field in particular, I would like to emphasize only the issue that civil society organizations and other alternative sources have brought us here, too, about the violations that have occurred in the past and that still exist in many places, and that we must try to rebuild the social fabric of people affected by intersex genital mutilation in times when it was not well known, we all know that times have changed, but how are we working in the Mexican state in the medical capacity to order this situation, to prevent, to deal with, and to punish when there is a wrongful malpractice? […]

Ms. Aurora del Rio Zolezzi (Deputy Director General of Gender Equality at the National Centre for Gender Equality and Reproductive Health, Ministry of Health) (Video @ 01:12:03) replies on intersex, admitting that IGM is still an issue in Mexico – but ignoring the question about what Mexico does “to deal with, and to punish when there is a wrongful malpractice”:

Unofficial Transcript (based on the original Spanish one):

« Thank you, good afternoon again. In Mexico, as part of the programs related to equality, for the incorporation of the gender equity and human rights perspective, in the areas of gender equality and human… »

In terms of guaranteeing access to all persons with disabilities, indigenous and Afro-Mexican persons, staff have been trained in human rights, sexual diversity, interculturality, inclusive communication and non-discrimination. On average, 18,000 public servants a year are trained in these subjects. […]

As for LBTTTI populations, and in particular the issue of intersex and genital mutilation in persons born with intersex characteristics there is… recently, it is a very recent protocol that was published in the country, which was developed by experts from different institutions, it is the protocol for the care of sexually diverse and intersex persons, in which there is a specific guide for the care of people living with intersex, with characteristics of an intersex state, and which establishes the need not to carry out surgical interventions, especially irreversible surgeries, in early childhood. We know that it is an issue that we still have the task of reaching the base of the national health system, disseminating and eliminating the practices that are persisting, both in counseling and in the performance of surgical interventions in this regard […] »