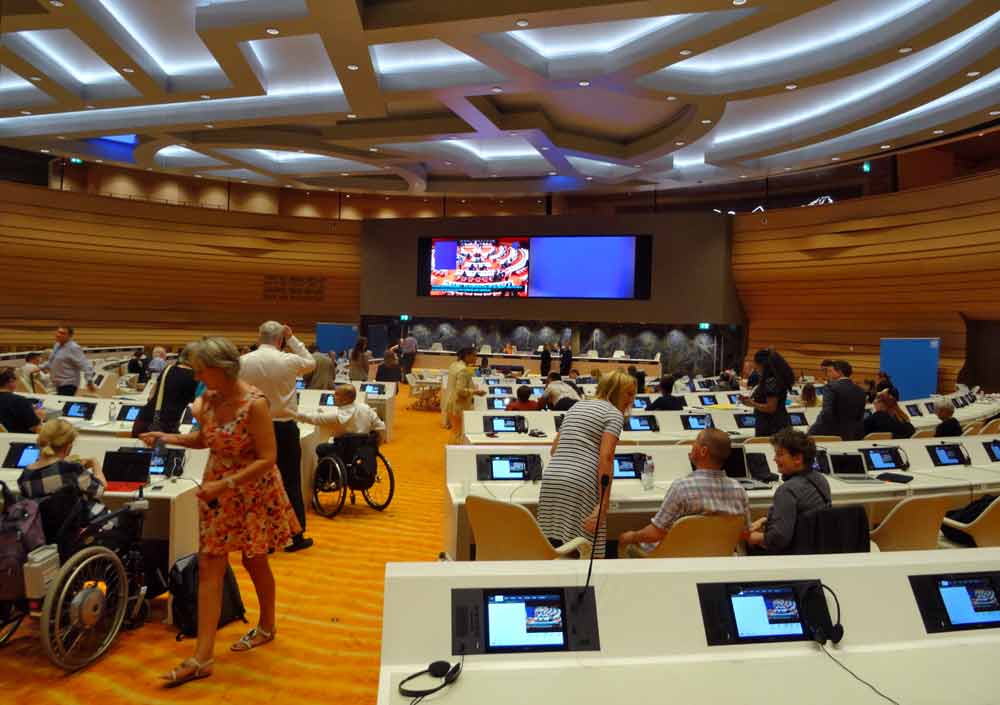 At the 18th Session of the UN Committee on the Rights of Persons with Disabilities (CRPD), the United Kingdom is being questioned over Intersex Genital Mutilations, with hopefully tough questions on intersex and IGM on
Wed 23.08.2017 15-18h CET + Thu 24.08.2017 10-13h CET
>>> Archived VIDEOS: Session1 | Session 2

15:37h: (Video @ 00:37:30) YAY!! Committee expert Mr. Jun Ishikawa asked a first question about intersex persons under article 8 CRPD, regarding measures to overcome negative attitudes, stereotypes and prejudices! 🙂
Unofficial Transcript derived from UN Live Captioning: «I have three questions for this round. First, about article 8. Please provide information about regular and targeted measures to overcome negative attitudes stereotypes and prejudices against persons with disabilities, in particular persons with dementia, with autism, with intellectual or learning disabilities, with psychosocial disabilities, and intersex persons in the State Party and that devolved governments.»

16:07h: (Video @ 01:07:00) YAY!! Committee Chairperson Ms. Teresia Degener asked under art. 7 (children with disabilities) for information on intersex genital mutilation, which is reported to be widespread in the UK, and is considered by UN Treaty bodies as a harmful practice and a violation of CRPD! 🙂
Unofficial Transcript derived from UN Live Captioning: «I would like to have information on the treatment of intersex children in the UK. We have information that there is widespread intersex genital mutilation going on, and you know that this Committee and other Treaty Bodies regard that harmful practice as a violation of our Convention.»

16:30h: Session resumed, first round of answers by Head of Delegation …

16:41h: … answering on raising awareness now … but intersex left out once again!

17:05h: (Video @ 02:04:50) (Non-)answer by undisclosed woman from the Home Office to the Chairperson’s question on IGM – by answering on FGM! … (but not a single word on IGM, of course – that would be the day!) 🙁
Unofficial Transcript derived from UN Live Captioning: «Regarding the Chair’s important question on genital mutilation, female genital mutilation or FGM is an issue which the government takes extremely seriously. The government has set up a specialist FGM unit which is driving a step change in nationwide outreach on FGM. The government has introduced mandatory a duty for front line professionals to report cases of FGM and an FGM protection order to prevent children at risk being taken out of the country.»

17:27h: (Video @ 02:27:30) The Head of Delegation Mrs. Karen Jochelson  announces that questions on intersex children will be answered tomorrow …
Unofficial Transcript derived from UN Live Captioning: «We are aware that there are three questions that we haven’t addressed, in relation to international requirements on the sustainable development goals, intersex children and discrimination in court cases which we would like to take up tomorrow. Thank you for your patience.»

09:58h: Waiting to start … and hoping for strong follow-up questions on intersex and IGM, particularly in the light of yesterday’s outrageous display of ignorance and denial by the UK Delegation!

10:53h: (Video @ 00:53:33) Scottish Delegate Donnie Jack non-answers on intersex, predictably ignores question on IGM, plus falsely claims there’s funding for intersex (while as substantiated in the Intersex Report for the Session DOC | PDF, p. 12-14, in fact all “intersex funding” is paid out to LGBT organsiations insteead, and NONE OF IT to actual intersex organisations …). 🙁
Unofficial Transcript derived from UN Live Captioning: «Finally, turning to the point on intersex raised by yourself, Madam Chairperson and Mr Ishikawa. My government added intersex equality to its approach to gender identity in 2014. This was in recognition of the specific issues intersex people may face. We have provided funding of 45,000 pounds each year since 2015 to one of our leading LGBTI organisations, the equality network, to facilitate engagement between public bodies and intersex people. The funding supports their inclusion and engagement in the equality policy and in the development of best practice. We will be publishing our consultation on gender identity later this year, and as part of that consultation, we will fully consider the points in relation to the rights of intersex people.»

ca. 11:15h: Head of Delgation claims now all open questions from yesterday were answered (i.e. including the one on IGM) … 🙁

11:47h: (Video @ 01:46:50) YAY!! Chairperson Ms. Theresia Degener follows up on intersex! Clarifies she asked about intersex genital mutilation, not FGM, and that giving money to LGBT organisations doesn’t address intersex and is not an adeqate means to stop torture on intersex children … 🙂
Unofficial Transcript derived from UN Live Captioning: «I would like to thank for comprehensive answering our questions and especially, I would like to thank the Distinguished Delegate from Scotland for taking up the intersex subject, the subject of intersex persons, because when I listened to your answers yesterday, I thought there was a misunderstanding because you related, the answers related to female genital mutilation, but I was talking about intersex genital mutilation. And in regard to that I think while it is commendable to give 45’000 pounds to LGBTI community, it does not mean that this money reaches intersex persons and that the harmful practices which I mentioned yesterday, which this Committee and other Treaty Body Committees consider as ill-treatment and in some instances as torture, will be stopped, and I’m afraid that giving some money to civil society is not enough in order to stop serious human rights violations.»

12:51h: Scottish Delegate ends next round of answers, did NOT answer on intersex and IGM … 🙁

12:54h: (Video @ 02:54:10) Delegate Mr. David Nuttal of the Health Department follows up on intersex and IGM, claims IGM constitutes medically necessary health care and is therefore excluded from prohibition of FGM, and the “consent” of parents to be sufficient – who’d’a thunk!! 🙁
Unofficial Transcript derived from UN Live Captioning: «Turning to the question from the Chair, and to supplement our previous answer. The female genital mutilation act 2003 makes female mutilation FGM a criminal offense, but sets out the medical circumstances in which surgical procedures are permitted. These circumstances are where the operations are carried out by an approved person such as a medical professional and are necessary for a woman or girl’s physical or mental health and this could, in certain circumstances include interventions for intersex. Decisions on whether such intervention is necessary will be made in consultation with parents or carers following careful assessment of the individual circumstances of the case.»