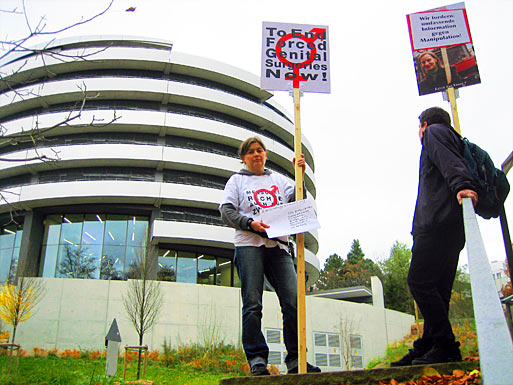 The history of the sciences of sex, gender and sexual differentiation, including amongst other disciplines, biology, endocrinology, genetics, sexology and gender studies, is inextricably intertwined with the history of the medical crimes committed on hermaphrodites (1).

In the last decade, criticism of abuse of hermaphrodites in the name of scientific theories and research started to emerge by the people concerned, aimed mostly at the new discipline of gender studies (2). In the meantime, this criticism is becoming a topic further explored by criticised themselves, however, up to now still considerably hindered presumably by blind spots of the ‚gender lens‘.

On the other hand, detailed criticism aimed at the ‚hard science‘ disciplines seems almost non existent, let alone empathy from the scientists concerned, despite the obvious and close bi-directional relations, i.e. both with regards to the ongoing medical crimes against hermaphrodites and the published data thereof being part of the foundation of these disciplines, as well as new findings within these ‚purely scientific‘ disciplines inevitably being used by the actual perpetrators to justify and perpetuate their bloody deeds.

No one will ever know, how many lives of innocent hermaphrodite children were irreversibly ruined or even lost by medical crimes in the name of science, how many suffered from mutilated and butchered genitals, loss of sexual sensation, constant pain, horrific scars, massive trauma, suicide, to name just some of most obvious consequences.

>>> Full Text: Open Letter of Concern to 11th EMBL/EMBO Science and Society Conference ‘The Difference between the Sexes – From Biology to Behaviour’ (Zwischengeschlecht.org)