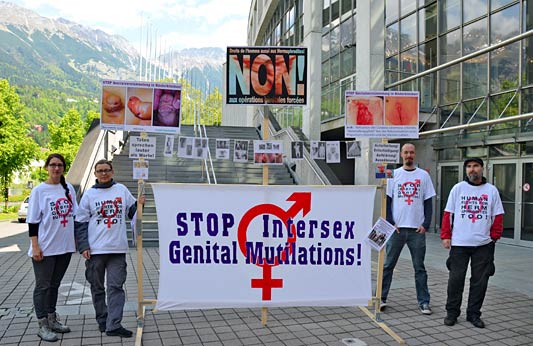 One abstract stuck out from the presentations at the “25th Anniversary Meeting of the European Society for Paediatric Urology”: Doctors at Centre for Reproductive Medicine and Andrology Münster (Germany) for once made the effort to actually put the old medical fairy tale purported by the mutilators guild until today, “Undescended testes can’t produce hormones and are sterile anyway” to a practical test by examining 8 persons with “uncorrected abdominal undescended testes” aged 14–36.

Lo and behold: Their results defied current medical “knowledge” – but confirmed what intersex persons and their organsiations have been claiming for decades: Abdominal testes usually have normal hormone production – and in many cases (in patients aged 14, 16 and 30 (!)) even spermatogenesis sufficient for fatherhood! 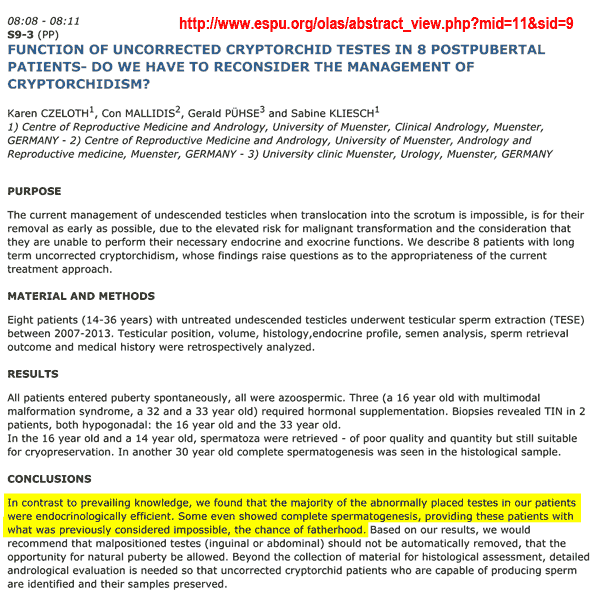 For the authors of the presentation these findings were the reason enough to actually call for a review of the current medical practice for “undescended testes”. If the mutilator’s guild will heed this call and take appropriate action remains to be seen.

During one of our peaceful vigils, we had the opportunity to briefly discuss the findings with presenter Karen Czeloth and to thank her for this courageous effort. She personally confirmirmed the findings, and told us, when extracting sperms direcly from the testes, also many klinefelter persons have a chance of fatherhood.

These explosive findings presented at the “25th ESPU 2014” will hopefully increase the pressure on “know all” IGM doctors who (now against better knowledge!) continue to allege that all abdominal testes must be immediately removed or surgically “brought down” and transfixed to the scrotum in the name of fertility and an (allegedly) “high cancer risk”, as well as providing human rights bodies (e.g. WHO, CAT, SRT) with additional ammunition to criticise systematic catrations of intersex children (often under eugenic-racist-nazi implications). And last but not least open the floodgates for lawsuits against mutilators, who incurably choose to continue to castrate intersex persons without actual medical need!