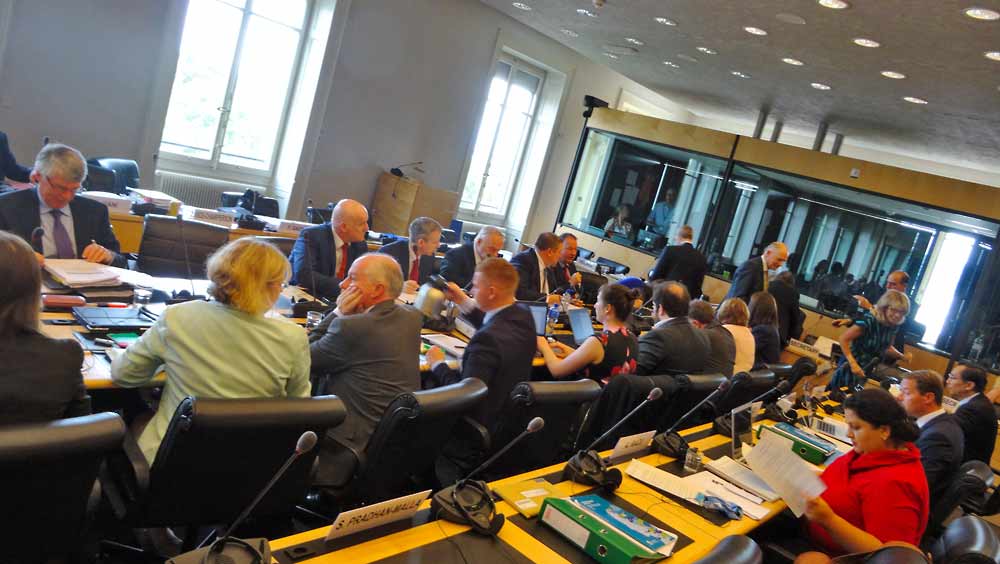 At the 61st Session of the UN Committee against Torture (CAT), Ireland is being questioned over Intersex Genital Mutilations, with the Committee experts for Ireland, Ms. Gaer and Ms. Racu, both raising IGM in Ireland yesterday.

StopIGM.org will be reporting LIVE from Palais Wilson! The session should also be livestreamed on webtv.un.org (during the 1st session yesterday, due to technical problems the transmission was audio only.)

14:52h: Committee members and the Irish delegation are arriving, the livestream is back on! Today the Irish Delegation will have to answer to yesterday’s questions …

15:03h: Session is on, Head of Delegation David Stanton, Minister of State for Equality, Immigration and Integration, Department of Justice and Equality kicking off … announces statistics will be delivered in writing later (to be published on the Committee’s session homepage) … Michael Donnellan of the Irish Prison Service starts answering …

15:27h: Answers re: mental health now up … followed by answers on the ex-gratia scheme for survivors of symphysiotomy …

15:34h: Sarah Rose Flynn, Assistant Principal Officer, International Research and Policy Unit of the Department of Health (non-)answers on intersex genital mutilation! Allegedly only 2-3 children with ambiguous genitalia are born in Ireland, and all are treated in Our Lady’s Hospital in Crumlin (Dublin). Surgery would only be done when medically necessary and after an unanimous decision of the multidisciplinary and parents. Every 3 months there’s a meeting with paediatricians also from other Irish clinics and with a consultant from Great Ormons Street Children’s Hospital (London).
Besides the last item, the (non-)answer was pretty much copy/pasted from last time at CEDAW … And the (non-)answer completely ignores the question of implementation of CRC and CEDAW recommendations, completely ignores the evidence of IGM1 “hypospadias repair” also being perpetrated at the University hospitals of Cork and Tallaght (see NGO Report, PDF p. 10), completely ignores the question on children being sent abroad, as admitted to by Crumlin’s Dr Costigan in in the case of “more complicated rare surgeries” in a report in the Irish Examiner [WARNING: Grossly misleading and inappropriate pictures], makes excuses regarding data collection and statistics, and generally denies the responsability of the Irish state …

16:38h: The last answers of first round, regarding police force …

17:30h: Intermission … there were no follow-up questions on intersex …

ca. 12:25h: YAY!! CAT expert on Ireland Ms. Ana Racu raises “intersex genital mutilation”, aks about data collection disaggregated by type of IGM and age, and about plans to legislate against the practice. 🙂 Transcript to follow.