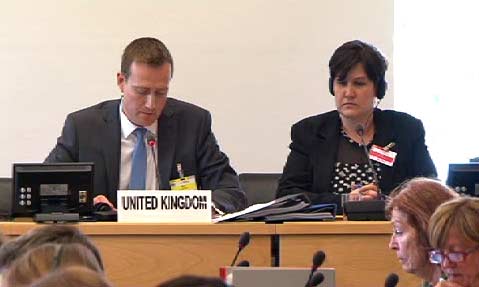 Today and tomorrow it is the turn of the UK to be questioned over Intersex Genital Mutilations at the 72nd Session of the UN Committee on the Rights of the Child (CRC) in Geneva, transmitted live via treatybodywebcast.org.

UN-CRC has consistently recognised IGM as a ‘harmful practice’ (like FGM) and as ‘violence against children’. Only last week the Committee questioned Nepal over IGM practices, and so far already reprimanded Ireland, France, Chile and Switzerland.

Intersex advocates attending the session in Geneva today are expecting tough questions also for the UK, and both the UK and Nepal to be reprimanded by CRC on June 3rd.

‘Until such time as there is a change in the law, we remain happy to undertake clitoral reduction surgery’ – Dr I. Mushtaq (GOSH, UCL)

While complicit UK government and NHS bodies are quick to deny the ongoing practice, intersex organisations StopIGM.org, IntersexUK (ISUK), OII-UK and UK Intersex Association (UKIA) collected damning evidence on the most common forms of IGM as well as moving testimonies by IGM survivors in a recent NGO Report to the Committee:

The UN Committee on the Rights of Persons with Disabilities (CRPD) also considers IGM as ‘inhuman treatment’ and since 2015 has reprimanded  Germany and Chile.