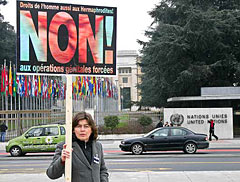 In its >>> Concluding Observations (PDF), the Committee against Torture criticized especially medically not necessary castrations (unfortunately the only form of cosmetic genital surgeries specifically highlighted in the shadow report) and on pages 6-7 recommended amongst other things, that Germany

(a) Ensure the effective application of legal and medical standards following the best practices of granting informed consent to medical and surgical treatment of intersex people, including full information, orally and in writing, on the suggested treatment, its justification and alternatives;

(b) Undertake investigation of incidents of surgical and other medical treatment of intersex people without effective consent and adopt legal provisions in order to provide redress to the victims of such treatment, including adequate compensation;

This is a big step forward! Hopefully, in the near future all forms of medically not neccessary cosmetic genital surgeries on intersex children will be reorted to UN committees, and considered accordingly.

Intersex (or “inter-sex” and “inter-sexual persons” respectively) were also mentioned in the UN press releases on the review of Germany (Session 1 | Session 2).

Preview: The next the UN-agenda will be Switzerland’s Universal Periodic Review (UPR) by the UN Human Rights Council (HRC) in October 2012, cosmetic genital surgeries will be specifically mentioned in a joint shadow report of 47 Swiss NGOs including Zwischengeschlecht.org. In 2013, Germany’s and Switzerland’s follow-up reports on the implementation of the UN Convention of the Rights of the Child (CRC) are due, with shadow reports by NGOs pending, as well as the UPRs of Germany, India and other countries.