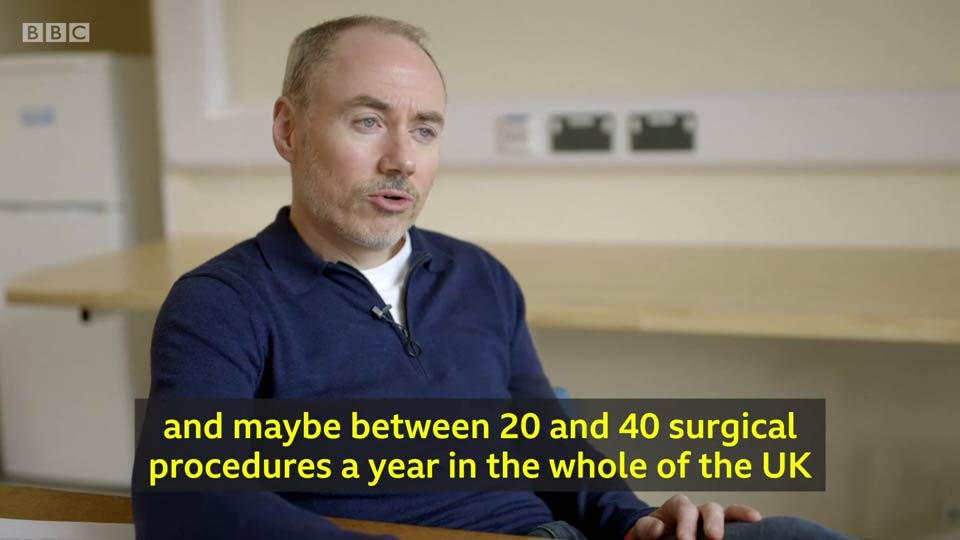 NHS Bristol paediatric surgeon Mark Woodward, “the chair of the NHS England review of surgery on intersex people”, publicly admits to performing involuntary genital surgery on intersex children, according to the BBC “the majority of [it] not medically needed”. (However, according to a recent UK Study there are rather 2900 IGM procedures annually.)

We’re saying kudos to Dr Woodward for going public in a >>> 15-minutes BBC video report about “Intersex surgeries” (which actually are not about “assigning sex”, but according to the UN simply a serious human rights violation – also the often-repeated wrong number of allegedly “as many as 1.7% of the world have intersex traits” is unfortunately as false as claiming “the UN” would say this, actually there are rather 0.2% intersex people, see this excellent rebuke by BBC’s Tim Harford).

The following is a transcript of Mark Woodward’s statements in the video:

[ video @ 11.46 min ] Mark Woodward (Consultant Paediatric Urologist [Surgeon], NHS Bristol): But that’s just focusing on that small aspect of health. And that’s not necessarily looking at psychology, the social impact of it.

Commentary: Mark Woodward will be the chair of the NHS England review of surgery on intersex people.

Moderator: Of the numbers of surgeries that are happening on DSD children in the UK, how many of those are necessary medically?

Woodward: It looks like roughly 150 children a year are assessed as new patients with DSD, and maybe between 20 and 40 surgical procedures a year in the whole of the UK, so we are talking about relatively small numbers.

Moderator: Of those 20 to 30 who are having surgery, how many of those would you estimate are absolutely required to happen in childhood?

Woodward: Yes, so I mean that is the big question, if you said are these procedures absolutely medically necessary? I.e. is a child going to come to harm if they don’t have surgery, well that number would be not that whole group, it would be smaller than that.

Voiceover: So while the majority of UK surgeries on intersex or DSD children are not medically needed, Mark Woodward, like Joyce Mbogo in Kenya, says it is often the parents pushing for them.

Woodward: So yes sometimes when you hear people talking about surgery, it’s as if we, the surgeons, are kind of dragging the children out of the parent’s arms and doing the surgery somehow against what the parents want. I mean that has never been my experience with the UK approach in DSD. I mean I feel, as do most of the people I speak to involved is that our position s we do not want to do any surgery, we would rather not do any surgery at all. I can imagine some teenagers saying, I wish I hadn’t had to make this surgery decision for myself.

Moderator: But are these imagined scenarios?

Moderator: So we don’t know.

Woodward: Yeah that’s the problem we have absolutely no idea.

[Next segment: The Lohmans in Milwaukee, parents of intersex child Rosie: “All of the horror stories we were told Rosie’s life was going to be like if we just left her be and none of which have come true. […] Rosie is fine.“]