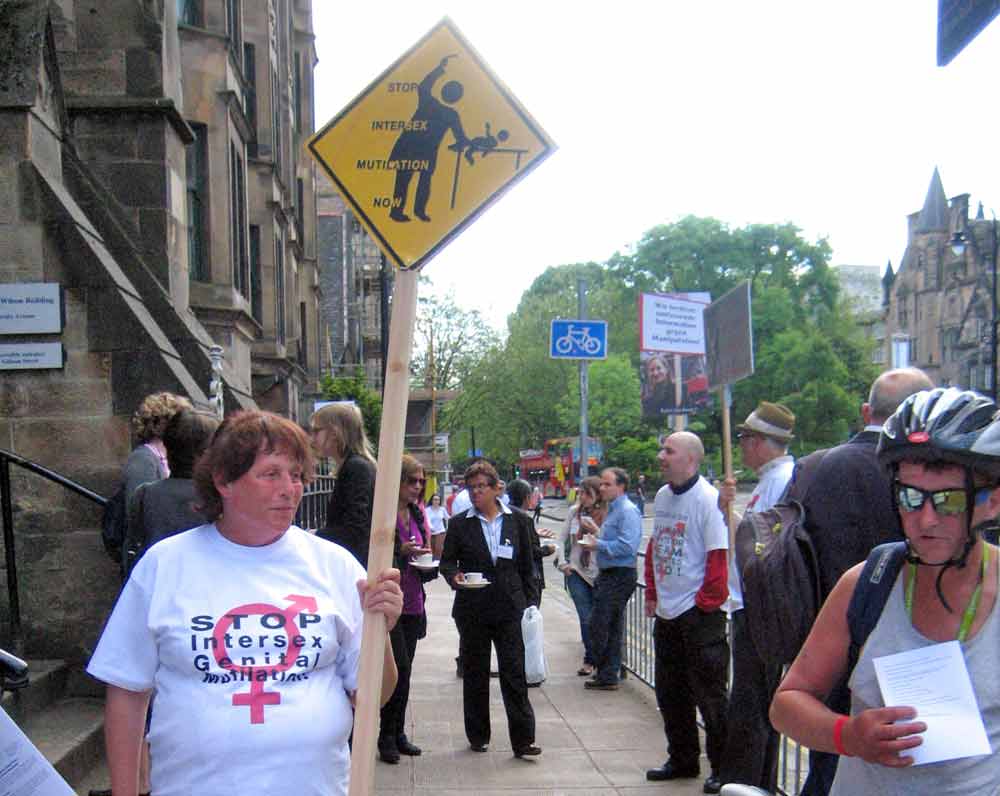 During its 18th Session in Geneva, the UN Committee on the Rights of Persons with Disabilities (CRPD) examined intersex genital mutilation in NHS clinics. The Committee’s now published ‘Concluding observations’ unmistakably condemn ‘involuntary medical treatment’ of intersex persons on the NHS including ‘forced sterilisation’ and ‘corrective’ genital surgery, lack of ‘equal access to justice’ for victims, and the lack of consultation and effective participation of intersex organisations in decision-making processes concerning policies and legislation affecting them (CRPD/C/GBR/CO/1, full reprimand to the UK + download see below).

On the first two counts, the UK has already been reprimanded by the Committee on the Rights of the Child (CRC), which in 2016 condemned unnecessary genital surgery on intersex children as a ‘harmful practice’ (just like FGM).

On occasion of the 18th CRPD session, the Committee on the Rights of Persons with Disabilities also obliged Morocco to ‘prohibit and criminalise’ involuntary surgeries on intersex personsand to ‘raise awareness of such practices as harmful’ (CRPD/C/MAR/CO/1, full reprimand to Morocco + download see below).

Intersex NGOs IntersexUK, The UK Intersex Association, StopIGM.org and intersex advocate Leslie Jaye provided CRPD with evidence of the ongoing practice allover the UK, personal testimony to the lifelong severe pain and suffering caused by IGM, and salient examples of intersex government funding being paid out to 3rd party LGBT organisations instead, or to “LGBTI” organisations without acual intersex representation and expertise, while intersex organisations continue to remain unfunded.

‘Governments and parliaments must finally introduce effective legislation to end intersex genital mutilation on the NHS. Perpetrators must be prosecuted and punished. IGM survivors must get equal access to redress and justice. And funding designated to support intersex organisations must no longer be misallocated to 3rd party groups.’

In Geneva, the UK tried in vain to sidestep Committee experts’ questions on intersex and IGM. Thankfully, CRPD Chairperson Theresia Degener refused to have the wool pulled over her eyes, but called the UK’s bluff:

‘You answered on female genital mutilation, but I was talking about intersex genital mutilation. And while it is commendable to give 45’000 pounds to the LGBTI community, it does not mean that this money reaches intersex persons and that the harmful practices which I mentioned yesterday, which this Committee and other Treaty Body Committees consider as ill-treatment and in some instances as torture, will be stopped, and I’m afraid that giving some money to civil society is not enough in order to stop serious human rights violations.’    >>> Full transcript + video

Intersex NGOs IntersexUK, The UK Intersex Association and StopIGM.org particularly appreciate that the Committee’s ‘Concluding observations’ to the UK include no less than 3 different binding recommendations on intersex and IGM under 3 different sets of articles of the UN Convention on the Rights of Persons with Disabilities (CRPD), namely under Freedom from exploitation, violence and abuse (art. 16), Protecting the integrity of the person (art. 17) and General principles and obligations (arts. 1-4).

And we appreciate that the Committee also explicitly obliged Morocco inter alia to ‘prohibit and criminalize the practice of corrective surgeries on intersex persons […] in the absence of prior and informed consent’ and to ‘raise awareness of such practices as harmful’.

A.  General principles and obligations (arts. 1-4)

10. The Committee is concerned about:

(b)  The lack of sufficient mechanisms to ensure the effective participation of all organizations of persons with disabilities in decision-making processes concerning policies and legislation in all areas of the Convention, such as the strategy entitled “Fulfilling Potential: making it happen”.

11. The Committee recommends that the State party:

(b)  Establish mechanisms to secure the full participation of organizations of persons with disabilities in the design and implementation of strategic policies aimed at implementing the Convention across the State party, through objective, measurable, financed and monitored strategic action plans.

38. The Committee is concerned about abuse, ill-treatment, sexual violence and exploitation of women, children, intersex persons and elderly persons with disabilities, and the insufficient measures to prevent all forms of exploitation, violence and abuse against persons with disabilities. It is also concerned at reports of cases of disability hate crime, in the absence of consistent data collection and differences in legal provisions for sentencing different types of hate crime, particularly in England and Wales.

39. The Committee recommends that the State party, in close collaboration with organizations of persons with disabilities, and in line with target 16.3 of the Sustainable Development Goals:

(b)  Define comprehensively the offence of disability hate crime, and ensure appropriate prosecutions and convictions;

(c)  Ensure that all facilities and programmes designed to serve persons with disabilities are effectively monitored by independent authorities, in accordance with article 16 (3) of the Convention.

40. The Committee is concerned that persons with disabilities, including women, intersex persons, girls and boys, reportedly continue to be subjected to involuntary medical treatment, including forced sterilization and conversion surgeries.

41. The Committee recommends that the State party repeal all types of legislation, regulations and practices allowing any form of forced intervention or surgery, and ensure that the right to free, prior and informed consent to treatment is upheld and that supported decision-making mechanisms and strengthened safeguards are provided, paying particular attention to women, intersex persons, girls and boys.

37.   The Committee recommends that the State party prohibit and criminalize the practice of corrective surgeries on intersex persons with disabilities, in the absence of prior and informed consent, and the practice of forced sterilization, including forced chemical castration. It also recommends that the State party raise awareness of such practices as harmful and strengthen mechanisms aimed at ensuring that the informed consent of persons with disabilities is given for any medical and surgical treatment.