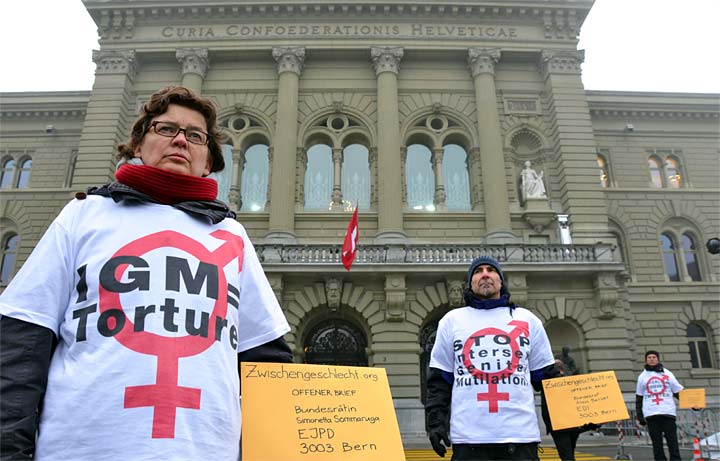 Christmas present for the Intersex Movement from the Swiss Capital of Berne! On Human Rights Day, we distributed an Open Letter (PDF, in German) and a flyer with additional info outside parliament, which we both also handed in or mailed to all members of the Swiss government, the presidents of both chambers of parliament, all parties and their youth organisations, and which we also emailed to every member of both houses.

The Open Letter reminded of the lack of follow-up on the 2012 recommendations by the Swiss National Ethics Commission NEK-CNE and the recent rebukes of Switzerland by the UN Committee of the Rights of the Child (CRC) and the UN Committee against Torture (CAT), and amongst other things called for legislation against Intersex Genital Mutilations including scrapping or prolonging the statutes of limitations, free access to psychosocial support including peer support for all persons concerned and their families, and public acknowledgement of the suffering inflicted on survivors.

Just before Chrismas we received a first answer by the Secretariat of the Legal Committees (PDF –> p. 3, in German) dated 22 December, informing us that the Open Letter has been considered as a petition and forwarded to the Legal Committees of both Houses of Parliament, where it will be discussed in public proceedings, which “according to experience will take some time.” Therefore, a legal prohibition of IGM practices is now on the agenda in both houses!

Zwischengeschlecht.org / StopIGM.org warmly welcomes this move – and intends to use this time for further upping the pressure. Already we’re in contact with members of parliament, and currently also the UN Human Rights Committee (HRCttee) is investigating IGM practices in Switzerland. And in the near future Switzerland will be coming up for more state reviews e.g. by the UN Committee on the Elimination of Discrimination Against Women (CEDAW). To be continued …