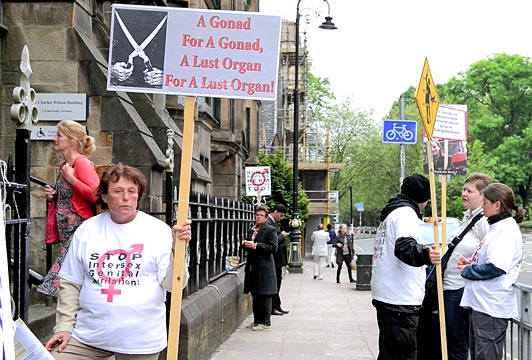 FOR THE MUTILATORS, international ‘D$D’ or rather IGM conferences are usually a bit like a paid holiday. They get to travel, sightseeing, shopping, as well as meeting fellow mutilators. Not to mention the everlasting academic pissing contests, which IGM clinics and clinicians snipped, and snapped, and published the most and the bestest. All paid for. No wonder so many mutilators are always looking forward to next year’s IGM destinations!

Unless they find themselves confronted by fierce nonviolent protesters picketing their prestigious meetings – all day long, all conference long – whenever they come or leave or go for a smoke, they have to face the facts that their crimes are being noticed. That survivors are NOT happy. That these facts are becoming better reported in the media, better known in the public, and better recognised by human rights bodies. How surprisingly many of their peers appreciate and support the concerns at the heart of the protests.

While there’s still only a small group of survivors and supporters undertaking the hardships and exposure associated with nonviolent protests, and we obviously can’t cover all IGM conferences and meetings, still the mutilators can never be too sure when and where to expect confrontation next – as well as being challenged inside their playgrounds, too!

It’s important putting up the pressure on the perpetrators. On all levels. Left to their own devices, the mutilators will never stop …