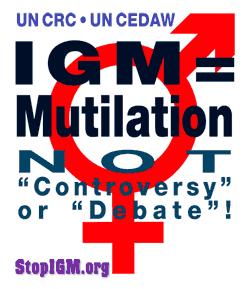 Since 2011, intersex human rights at the UN and particularly intersex and IGM survivors NGOs participating in UN Treaty body human rights mechanisms have been a ground-breaking success story.

So far, the UN Committees CRC, CAT, CRPD, CEDAW, and the HRCttee have issued 26 reprimands for Intersex Genital Mutilations to 16 complicit States, unmistakably condemning IGM as genital mutilation and a hamful practice, as cruel and inhuman treatment or torture, as a violation of the integrity of the person, as institutionalised violence and as unlawful human experimentation, calling for legislation to criminalise IGM and guarantee access to redress for victims.

However, after 2 1/2 particularly good years for intersex human rights with almost monthly new reprimands, now everything seems coming to a screeching halt …

Intersex human rights at the UN under attack!

“These days my most pressing concern is how our pain and suffering is constantly used as a means to an end for LGBT and gender politics, and how such misrepresentations seem to increasingly gain traction also at the UN.”
–  Daniela Truffer, CAT61 Informal Statement 26.07.2017

This is a major setback for intersex human rights at the UN,

fueled not only by the constant denial and pinkwashing of IGM by State parties, but also by often big-money LGBT NGOs and agencies including ILGA, Amnesty London, EU-FRA, UNFE New York – and countless others – constantly misrepresenting intersex and IGM as “LGBT”, “discrimination” and “health-care” issues, while conveniently failing to recognise that intersex and IGM first and foremost constitute genital mutilation, a harmful practice, cruel and inhuman treatment, and other serious violations of non-derogable human rights, and MUST be addressed accordingly.

Also beyond the latest CEDAW Concluding observations (see below), this is a serious threat to intersex human rights, which may rather sooner than later spell their very end not only at the UN.

This is a wake-up call!

If intersex and IGM are no longer reognised by UN Treaty bodies as cruel and inhuman treatment, harmful practice, institutionalised violence, etc., this will have serious and far-reaching consequences for all intersex people everywhere – and in particular for intersex children at risk of being submitted to IGM.

So, if you care about intersex human rights, and if you don’t want intersex children to continue to be mutilated every day, stop looking the other way when voices of IGM survivors are misrepresented or drowned out, and the pain and suffering of IGM survivors is used for third party interests. Thank you!

StopIGM.org regrets that the Committee, after having issued 5 Concluding observations on intersex and IGM under “harmful practices” to France, Switzerland, Netherlands, Germany, and Ireland, in its latest recommendations to Italy now considers non-consensual, unnecessary genital surgeries on intersex children as a “health issue” instead. We maintain that Intersex Genital Mutilations are NOT “health-care” or “different opinions”, and hope that in the future the Committee will again consider intersex and IGM under art. 5 “harmful practices”.

41.    The Committee is concerned about:

(e)    The fact that intersex children are subjected to irreversible surgery for intersex variation and other medical treatments without their free and informed consent.

42.    The Committee, recalling its general recommendation No. 24 (1999) on women and health, recommends that the State party:

(e)    Develop and implement a rights-based health-care protocol for intersex children, ensuring that children and their parents are appropriately informed of all options; that children are involved, to the greatest extent possible, in decision-making about medical interventions and that their choices are respected; and that no child is subjected to unnecessary surgery or treatment.”