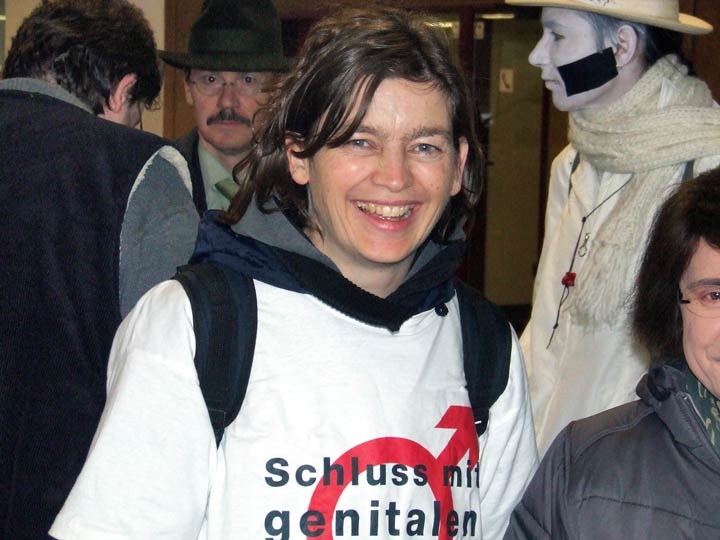 Photo: StopIGM.org’s Daniela Truffer in the Cologne Courthouse, 06.02.2008, on occasion of the historical win of 100’000 Euros damages for non-consensual unnecessary surgery by intersex claimant Christiane Völling (front right, cut) and her lawyer Georg Groth (back, with hat). Welcome back to the land of the living, Daniela!

Last week my heart stopped beating. I had spent weeks denying the fact that I had to go to the hospital, out of my fear of doctors in general and hospitals in particular. In the end I couldn’t even walk five minutes with my dog without being out of breath and having serious chest pain.

But still, Markus had to drag me to the Cardiology Department at the University Hospital of Zurich (where I had been due for my bi-annual check-up since January) for an ultrasound, where the problem was detected at once: tachycardia. Probably due to my condition or a previous surgical scar, my heart had kind of short circuited, with an electric current circling in it at a fixed speed, every second round triggering a heart beat overriding the usual impulses, leading to my heart running at a constant rate of 134 all the time.

Now my heart was weakened because of the effort, and didn’t work properly anymore. The doctors told me that they had to perform a cardioversion urgently, a medical procedure to convert my unhealthily fast heart rate to a regular rhythm by applying an electric shock to stop the circling current, a procedure they would do about daily.

I was terrified, thought of running out, accepting the alternative of dying within weeks, better than being treated in a hospital bed again (after 33 years of luck). Just entering a hospital and walking through the corridors makes me sick, every time.

Then the fear of dying gained the upper hand.

I insisted on Markus being present all the time, even during the procedure, and the doctors finally accepted, because I told them of my phobia of doctors and hospitals. (They knew about my intersex status from the medical record, and obviously also about my opinion on the surgeries in the media.)

I called my parents, old memories of my childhood in hospitals and their helplessness emerged, we cried together. They came to Zurich the next day, when the procedure was performed.

I was in tears out of fear, when the sedative hit. Markus told me, that after the electric shock was given, my heart beat stopped for a while, but then started again – thankfully triggered again by the regular impulses.

When I woke up, Markus was there and my parents, and I was relieved beyond all measure. Walking out of the hospital was like starting a new life.

Of course it was not over yet, as due to my heart now starting to beat stronger again, during the night my lungs started filling with water, making it impossible to lay down. But with appropriate medication, this too resolved eventually, and three days later I could get my first night of proper sleep since weeks.

Now I should do a bit more sport. Self-check my heart regularly. Not miss my bi-annual check-ups. Work more on my compulsive self-sabotaging behaviour. And try to avoid activities known to entail exposure to unhealthy levels of self-exploitation, burn out, mobbing, marginalisation, resentment, you name it. I wish.