A recent italian media article published in various outlets including Palermo Today, La Repubblica and La Stampa documents intersex genital mutilators Prof Marcello Cimador (pictured, chief paediatric urology surgeon and head of the supervising “multidisciplinary team”) and Dr Renato Venezia (gynaecology surgeon) at the “Department for Mother and Child” of the “Policlinico Universitario Paolo Giaccone di Palermo” (Sicily) publicly boasting of removing the uterus and vagina of a 2 year old intersex child (= IGM 3  Sterilising Procedures) plus performing a “reconstruction of the penis and the urethra” (= IGM 1 “Masculising” Surgeries) on the same infant, allegedly “at the request of the parents.” 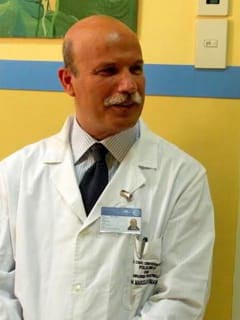 This comes only three weeks after the UN Committee on the Rights of Persons with Disabilities (CRPD) reprimanded Italy for allowing IGM practices to continue with impunity.

The total ignorance and arrogance of the self-aggrandising genital mutilators excitedly lecturing on “sex-change”, “surgical strategy”, “intense mulidisciplinary teamwork” and “exceptional success” in conjunction with the tacit acquiescence and total failure to put things in perspective of the journalist(s) concerned, make it hard to further comment on this atrocity, except for once more reminding that such involuntary unnecessary surgeries constitute “Harmful Practice” (same as FGM) and “Inhuman Treatment” punishable as torture according to multiple UN human rights bodies.

Our hearts are with the child, seeking solace in the fact that such shameless boasting makes for valuable evidence in front of international human rights bodies, usually resulting in more stern reprimands for IGM practices to the state party concerned, obliging them to to “adopt legal provisions”, “hold perpetrators accountable” and “provide timely and effective access to remedies to victims of such trestment, including adequate compensation.”