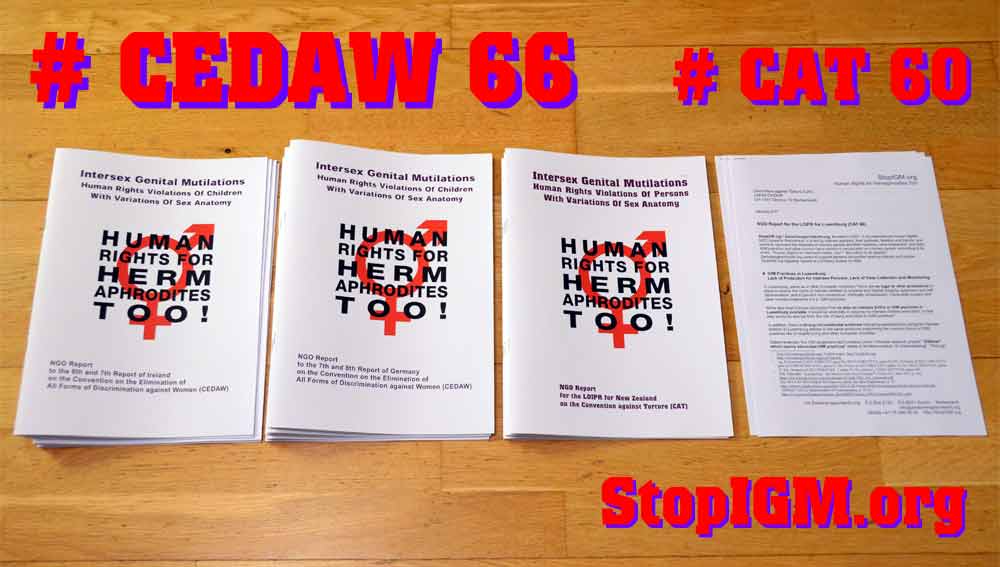 Dear friends of the Intersex Movement

SAVE THE DATE: 24-28 March the “European Association of Urology (EAU)” and 13 more international urology bodies will gather in London for the “32nd EAU2017 Annual Congress”, where IGM perpetrators from around the globe will advocate various forms of Intersex Genital Mutilations, and present the “EAU Hans Marberger Award 2017” in honour of the infamous Austrian amputator of “enlarged clitorises”. StopIGM.org will organise non-violent protests against the “EAU2017” and local IGM perpetrators and enablers.

The UN Committee on the Elimination of Discrimination against Women (CEDAW) will investigate IGM practices in Ireland and Germany during its 66th session in Geneva. StopIGM.org submitted thematic NGO reports, substantiating the ongoing practice in both countries despite government denials. The reviews of Ireland (Wed 15 Feb from 10:00h CET) and Germany (Tue 21 Feb from 10:00h CET) and other public hearings will be transmitted live. For more info, see intersex.shadowreport.org. We are expecting CEDAW to sternly reprimand both countries for harmful practices against intersex children at the end of the 66th session (3 March).

StopIGM.org’s Daniela Truffer was invited to the international BanFGM Conference organised by No Peace without Justice (NPWJ) and the Inter-African Committee on Traditional Practices Affecting the Health of Women and Children (IAC) in Rome 30 Jan – 1 Feb to talk on “Combatting Intersex Genital Mutilation”. The presentation was very well received, and as a result the Final Declaration of the Conference co-signed by African and Italian Ministers and international human rights representatives explicitly mentioned “intersex genital mutilations”. For more info, see StopIGM.org.

4. UN-CRC to investigate IGM in Denmark

The UN Committee on the Rights of the Child (CRC) drafted questions for Denmark during its 76th Pre-Sessional Working Group (6 – 10 Feb). StopIGM.org submitted a thematic NGO report substantiating the ongoing practice in Denmark despite government pinkwashing, and is expecting tough questions on IGM practices for Denmark to be published soon. For more infos see intersex.shadowreport.org.

During its 60th session (17 April – 12 May) the UN Committee against Torture (CAT) will draft questions for New Zealand and Luxemburg. StopIGM.org submitted reports substantiating the practice in both countries to be published at a later date, and is expecting tough questions on IGM for both states.

SAVE THE DATE: 29 June – 1 July “I-DSD” in collaboration with “DSDnet” will organise the “6th International DSD Symposium” at the well-know IGM perpetrator clinic “Rigshospitalet (University of Copenhagen)”. StopIGM.org will organise non-violent protests.