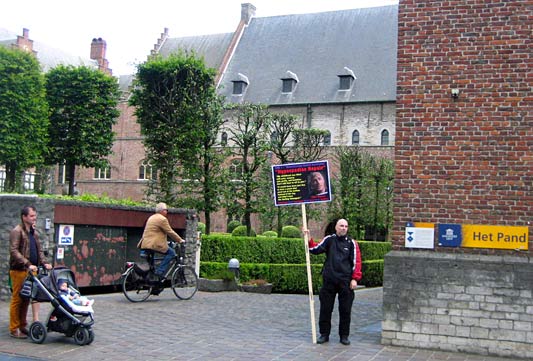 Just in time before the start of the ‘1st DSDnet Training School’, also the first of in total 8 intersex protests this week in Ghent (Belgium) kicked off, reminding the seasoned as well as aspiring doctors flown in from allover that IGM practices are a serious human rights violation. Organised by the multimillion Euros multinational “science research project” ‘D$Dnet’ and hosted by the University of Ghent in their “prestigious congress centre” ‘Het Pand’ for 30 “DSD researchers”, the programme of the ‘1st DSDnet Training School’ includes the whole range of IGM pactices, e.g. “Vaginoplasty, Dilation, Urosurgery (male) [a.k.a. ‘Hypospadias Repair’]”. 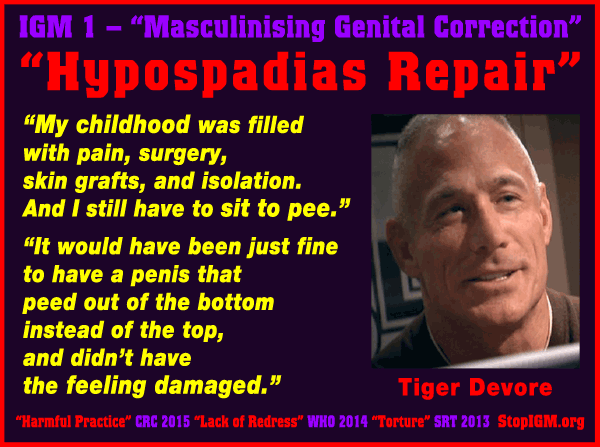 “Hypospadias Repair” was also highlighted by the the 1st protest (see picture of placard above). Although often neglected (and denied by doctors), “hypospadias repair” is currently the most common form of IGM practices, leading to sometimes dozens of “redo surgeries” and frequent and often dangerous complications [WARNING!!] constituting actual serious medical health problems where none where before.

Tiger Devore was one of the first survivors of IGM practices at all to speak out in public, and an excerpt (taken from our “STOP IGM Primer” (PDF)) of Tiger’s moving personal testimony “Growning up in the surgical maelstrom” was recently quoted in a report “Human Rights and Intersex People” published the Commissioner on Human Rights of the Council of Europe (COE).

StopIGM.org is honoured that Tiger allowed us to use his quote and picture to highlight the ongoing hypospadias mutilations for the first of a series of new placards featuring IGM survivors speaking out!

As at virtully any intersex protest, there were also good reactions by and conversations with participating doctors, although most just silently cringe at the presence of nonviolent dissent, with some resorting to openly hostile scoffs and sneers. In addition, also good conversations took place with passers-by, including an urologist in training and a staff member of a nearby sociology institute.

Nonetheless, as also customary at some (though not all) institutions, the Ghent University just couldn’t resist to do its worst to remove today’s (admittedly very small) peaceful protest, first by intimidating behaviour by a representantive (who wouldn’t reveal his name or function), repeatedly insisting the protest would have to “move away”, an opinion soon after reiterated by an official University security body builder arriving by car – alas, in vain: As he, after a phone call, eventually had to admit himself, peaceful protests on public ground are lawful – even in front of an intersex genital mutlator’s trainig school hosted by the Ghent University’s “prestigious Congress Centre” ‘Het Pand’. 🙂

Intersex protests will continue in Ghent all week – support welcome! 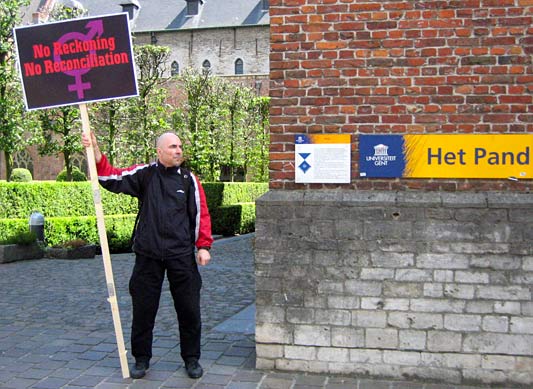