On occasion of the criticism of IMG Pactices by the UN Committee against Torture, the Swiss french language newspapers >>> “Tribune de Genéve” and >>> “24 heures” featured a great and prominent article by Caroline Zuercher (online 02.08.2015, print 03.08.2016 on p. 5 respectively 6).

In it, Daniela “Nella” Truffer (StopIGM.org / Zwischengeschlecht.org) once more bears testimony on the gross human rights violations perpretrated on intersex children, and calls for legislative action.

Also the Swiss paediatric surgeon Blaise Meyrat (University Clinic Lausanne) talks straight – on IGM Practices in general, and the urgent need for prolonging the statutes of limitations in particular.

This blog says many thanks!

An english translation of the ground-breaking statement by Blaise Meyrat after the scan: 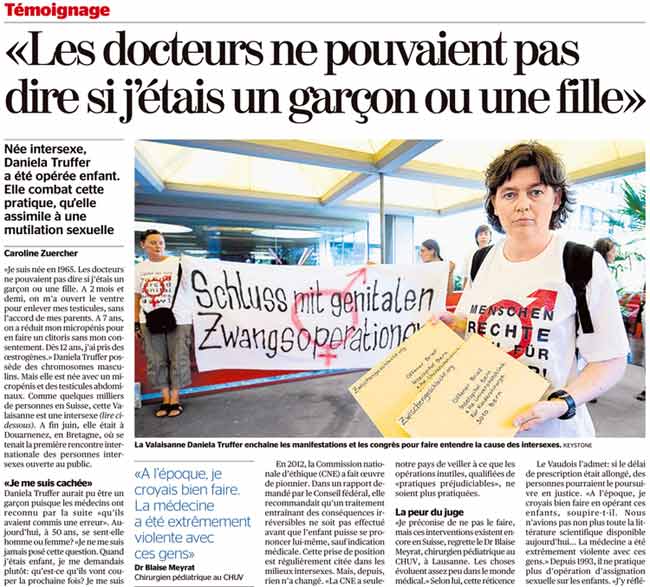 The Fear of the Judge

«I advocate not to do it, but such interventions persist in Switzerland,» regrets Dr Blaise Meyrat, padiatric surgeon at CHUV Lausanne [University Clinic].

«Things hardly evolve in the medical sphere.» According to Meyrat, this reluctance can be explained by «a fear of admitting to have erred.»

«In my opinion, only the fear of the judge will make things change,» he continues. «We need statutes of limitation long enough so that victims can press charges as adults.»

He admits, if the statutes of limitations were adapted, he himself could be pursued through the courts by persons concerned. «Back then, I believed I did the right thing by operating on these children» he sighs. «Also, we didn’t have all the scientific literature available today … Medicine has been exremely violent against these people.»

Since 1993, he doesn’t practice gender-assigning surgery on children anymore. «I’ve been thinking about it for quite a while» he recalls. «For me, it’s a question of ethics, but my public interventions have triggered violent reactions by my collegues. Today, doctors can’t claim they didn’t know it anymore.»