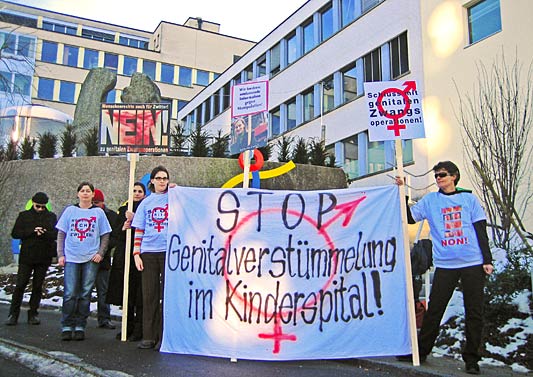 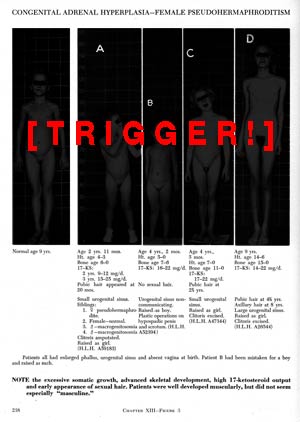 In 1950, the US-endocrinologist Lawson Wilkins introduced systematic cosmetic surgeries on children with “atypical genitals” at the Johns Hopkins University Hospital in Baltimore. Staying at Johns Hopkins at that time, visiting Swiss endocrinologist Andrea von Prader introduced this practice in Europe after his return to Zurich in the same year. In 1955, the now infamous sexologist John Money published a justifying theory after the fact, declaring early cosmetic surgeries as (pseudo) standard.

Since the late 1950s, medical guidelines around the globe have been recommending children born with “atypical genitals” a.k.a. “Hermaphrodites/Intersexed/DSD patients” to be surgically “corrected” preferably within the first 18 months of their lives. According to the classic surgeons’ motto “It’s easier to dig a hole than to build a pole”, most of them are “made to girls”, although in the meantime urologists increasingly indulge in the “challenge of masculinization”.

Today, according to studies by the mutilators themselves, at least 90% of the population born with “indeterminate” or otherwise “unusual” sex anatomies were (and still are!) submitted to on average multiple medically unnecessary genital surgeries starting in early childhood, resulting in appallingly high risk of lifelong loss of genital sensation, physical pain and massive psychological traumata. 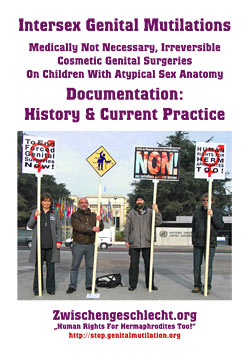 The cosmetic “treatments” include:

What these systematic non-consented surgeries actually do FEEL like for the “patients”, was never part of the equation, let alone their alleged “benefits” clinically tested. Adult “patients” were simply left behind by the hundreds of thousands.

Arguably, the continuing forced “medical treatments” of children with “atypical” genitals are one of the worst human rights violation perpetrated in the “developed countries” since the end of World War II.