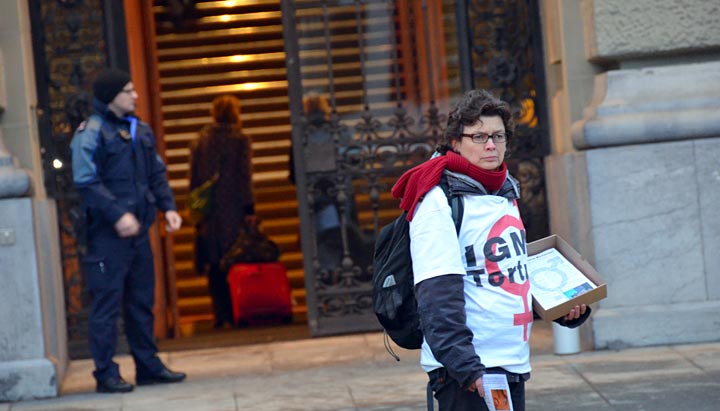 Great Article by Antoinette Schwab in the current issue of “Horizons. The Swiss magazine for scientific research”, published by “Swiss National Science Foundation (SNSF)” and “Swiss Academies of Arts and Sciences” – Thanks!
(Unfortunately, all the other articles in the issue’s thematic “Focus: Intersexuality” are textbook examples for intersex appropriation, and for “talking about us, but not with us” – Shame on you!)

For a long time, the medical profession has been keeping quiet about people whose biological [typically appropriating “translation” – here we go again …] SEX strayed from the norm. And change is only coming slowly. By Antoinette Schwab

There is nothing new about children being born with ambiguous SEX CHARACTERISTICS [typically appropriating “translation” – here we go again …]. They used to be called hermaphrodites, and later ‘intersexuals’. The latter term is misleading, however, because it incorporates the word ‘sexual’. To be more precise, “‘intersexuality’ refers to bodies, and in some circumstances to illness. It doesn’t primarily refer to sexuality or sexual orientation”, says Jürg Streuli, a doctor and medical ethicist from Zurich. For this reason, the abbreviation ‘DSD’ has been in use for a few years now, meaning ‘Disorders of Sex Development’ (or ‘Differences of Sex Development’).

The damage done by desiring clarity

From the 1950s onwards it was customary for DSD children to be assigned a gender as soon as possible, and for them to be surgically operated so as to adjust them to this chosen gender. This practice goes back to the sex researcher John Money in the USA. People with DSD had been operated on before this, but now it was given a theoretical basis and carried out systematically. It was in this context that Money standardised the use of the word ‘gender’ to signify one’s sexual identity in society. He was convinced that you could turn anyone into anything, as long as the environment was constructed accordingly. In order to make this easier, the appearance of the genitalia had to correspond to the gender to which one was assigned. So the genitalia had to be corrected as soon as possible after birth. Every child born with DSD was consequently treated as an emergency, even if this wasn’t the case in a medical sense. As a result, children underwent unnecessary cosmetic operations that could have been done at a later date, had they been desired. Some of those who experienced these operations in their childhood have described them in interviews and autobiographical reports as ‘torture’, ‘genital mutilation’ or even ‘child abuse’.

Those affected have found the silence enforced around them to have been at least as bad as the operations themselves. Their patient records bore the instruction: “The patient is not to be informed about this diagnosis”. That, too, was Money’s idea. The child should not be allowed any doubt about its gender. It had to endure surgical operations to the genitals – the clitoris was shortened or even amputated (or was it in fact really a penis?) and a neovagina was created that had to be stretched constantly. Initially, a metal rod was used for this; later it was made of plastic. And to avoid the supposed danger of cancer occurring, testicles and ovaries were also often removed. It was a paradoxical situation. For on the one hand, the children had to endure doctors, students and nurses peering between their legs at regular check-ups, but on the other hand, no one was allowed to say anything about it.

Most of those who speak out today only became aware of their diagnoses by accident. The stories they tell in Internet forums often sound similar: stories of pain and drugs without any explanation as to why these were necessary. Stories of shame, and of feeling afflicted by some possibly monstrous disease. Some even had to endure the public revelation of their diagnoses. When sex tests began to be carried out in sports, some female athletes were found to possess male chromosomes even though they had no idea about it at all. Such tests were sometimes evaluated by the very same institutions that had advised silence on the diagnosis of DSD in children.

It took a long time for people to start arguing against surgical gender assignment – and the reason for this probably lies precisely in the fact that people with DSD were kept in the dark about it for decades. It was not until the early 1990s that those affected began to protest against what had by then become a standard treatment. Their resistance became stronger when it was revealed in 1997 that Money’s textbook example – the so-called ‘John/Joan case’, to which doctors all over the world were still referring – had long been a failure. The boy in question had been surgically altered to assume a female gender at the age of two, but had switched his gender back at the age of 14, living from then on as ‘David’. He committed suicide in 2004.

“Intersexuality refers to bodies, not to sexual orientation”
Jürg Streuli

Daniela Truffer is from Switzerland, and she also only found out her story when she saw her medical files – by which time she was 35 years old. She was born in 1965 with male chromosomes but indeterminate genitalia and was then surgically operated upon to become a girl. It was the wrong decision, as a doctor later noted in her medical files. But that recognition came too late for her: “My original physical state has been lost irretrievably”, she has written on her blog: “They took my dignity from me”. She found out on the Internet that there are others who had undergone similar experiences. In 2007, Daniela Truffer founded the human rights group ‘Zwischengeschlecht.org’. Since then she has fought to have these operations stopped and has also been campaigning for the physical and mental integrity of children with DSD to be respected. She is convinced that many of these children are still being subjected to surgery today, and that children and parents alike are being inadequately informed.

Her group also offers advice to activists abroad and has already achieved success in several cases. For example, the Zurich Children’s Hospital had played a pioneering role in treating DSD in the 1950s, but in 2014 it initiated a medico-historical study to evaluate the treatment of people with DSD. This will be the first-ever study of its kind in the world.

The National Advisory Commission on Biomedical Ethics has also been dealing with this topic at the express request of the Swiss Federal Council. In a statement in 2012 – which is probably unique in the world – the Commission recommended that any decisions on treatment in the realm of gender determination should only be made when the persons affected are able to make those decisions for themselves. After a birth, parents can be in a confused or desperate state of mind and thus often want a quick decision; but this is precisely what should not be allowed. The Commission’s first recommendation on their list of 14 points runs as follows: “The suffering that some people … have had to experience because of past practices must be recognised by society”.

Today, clinics are more reticent. Some operations that are not medically necessary are postponed till later. Children and parents are better informed, and in the Zurich Children’s Hospital, for example, the team that decides on treatment includes representatives not just from the different medical areas but also from the fields of ethics and psychology. However, no overview exists of what operations are being carried out, or where. And to the present day, the recommendations of the Advisory Commission have not been turned into a binding regulation. The Federal Council intends to reply to this position paper by the end of 2015.

The topic is also being discussed at the UN. No less than three UN committees have commented on the Swiss situation in the space of a single year. Under the title “Harmful practices”, the Committee on the Rights of the Child expressed its deep concern about the surgical operations. The Human Rights Committee has asked for statistics, and the Committee against Torture has noted that neither sanctions nor reparations have been made, and it further recommends that all necessary measures be taken to guarantee the integrity and self-determination of those affected in future.

Antoinette Schwab is a freelance journalist in Bern.