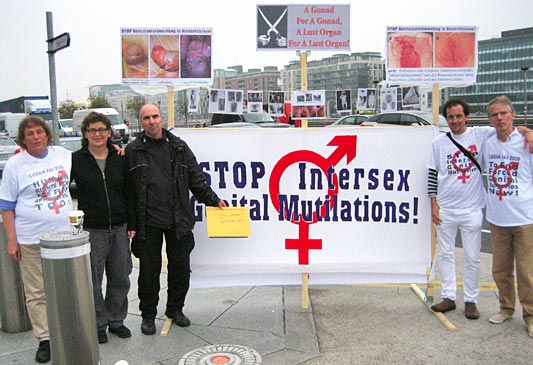 Just before heading out to the informal meeting with ’53rd ESPE 2014′ representatives:
Claudia, Daniela, Markus, Gavan, Patrick, Richard (photo), and the Open Letter
with over a hundred additional signatories, Dublin 19.09.2014.

Last year in Milano (Italy), our peaceful vigil was kindly approached by former ESPE secretary general and then ESPE president Francesco Chiarelli (Italy), who, after making sure we were behaving civilly, suggested we should ask for a meeting with ESPE representatives during the next annual meeting in Dublin. So after finally securing tickets to Ireland, we gladly took him up on his offer (PDF). Since Chiarelli was no longer serving ESPE in an official function, he kindly forwarded our communications to the current secretary general as well as to current Irish president Hilary Hoey, who involved representatives of ESPE’s DSD Working Group and kindly set up an informal half-hour meeting in a hotel bar near the Convention Centre, which took place on September 19th after lunch.

We thank ESPE for facilitating this dialogue at rather short notice. It’s noteworthy that, while as a result of our open letters we have been able to enter in a direct dialogue with several DSD clinics, this meeting marks the first time that a medical society rose to the occasion.

The following are Markus’s memory minutes of topics broached (not necessarily in sequence), which have been cross-read and OK’d by all participants:

Faisal Ahmed likened medicine to an oil tanker which can not make abrupt maneuvres and takes time to change directions. Both Faisal Ahmed and Anna Nordenström stressed that medicine is a part of society and cannot act outside societal expectations. Anna Nordenström brought up the example of Sweden rather unexpectedly no longer proscribing castration as a requirement for transsexuals to change gender in identity documents as an example how society can change. Regarding ESPE’s position on surgery, Faisal Ahmed referred to the endocrinologists’ letter to the UN Special Rapporteur on Torture.

Markus Bauer and Daniela Truffer stressed that non-consensual, medically unnecessary treatments of intersex children constitute serious human rights violations, as documented in the open letter, and that medicine should become more aware of human rights issues and its obligations under international law, which explicitly prohibits harmful practices justified by societal pressures. Also human rights are a vital part of society. Children are not the property of their parents to have them cut as they wish, they’re human beings with innate human rights, unlike for example a chair whose legs, if deemed too long, may be shortened by a saw at its owner’s desire. While UN bodies can also be likened to an oil tanker which may take time to reach travelling speed, human rights breaches by intersex treatments are currently being increasingly recognised across the board, with future increases in recognition to be expected.

Faisal Ahmed expressed discomfort with our protests outside medical congresses “painting all doctors with the same brush.” Markus Bauer conceded that, as long as medical societies as a whole continue to advocate early surgeries, this was a political tactic to increase pressure and provoke discussions among different medical factions, asking not to take it personally.

Faisal Ahmed brought up the DSDnet Working Group 4 he’s leading and which is tasked with ensuring consultation of intersex organisations, stressing how consultation is being increasingly recognised as important by doctors. He was impressed by the long list of signatories to the Open Letter, asking if we could represent these? Markus Bauer stressed that the intersex community is diverse and not a homogneous group, and that Zwischengeschlecht.org / StopIGM.org could not speak for other groups having signed the letter, and suggested DSDnet should organise a meeting inviting all groups to discuss e.g. a memorandum of understanding of issues relevant to DSDnet, and perhaps a delegation for further contact, like this DSDnet could ensure to have actual (and not only pro-forma) consultation, but still wouldn’t have to deal with dozens of individual groups all of the time. Also, while our group would welcome to be able to continue to participate a direct open dialogue, to avoid possible misunderstandings, this would not mean we would stop protesting peacefully. Faisal Ahmed agreed to stay in touch for further dialogue, and for us to make the intentions of DSDnet Working Group 4 known to other intersex organisations.

Hilary Hoey mentioned an actual case of 46,XX CAH in Ireland with complete virilisation incl. urethral opening at the tip of the penis, stating for her, and also for the parents, it would have been difficult letting this child grow up without surgery. Daniela Truffer cautioned that it is known that some of these children will later live as males, and that it’s not legitimate to have surgery on a child to address parents’ distress. Markus Bauer agreed that raising a child with atypical genitals is not always easy, and stressed the need for offering adequate psychosocial counseling for parents and persons concerned, and for health insurances to be able to cover for it, which, according to Hilary Hoey and Faisal Ahmed, in Ireland and the UK is not a problem. Markus Bauer asked Hilary Hoey how such children are treated in Ireland, referring to reports that they get transferred to UK clinics for surgery. Hilary Hoey replied also feminising surgeries were done in Ireland by two specialised paediatric surgeons.