[ Reloaded due to current events ] 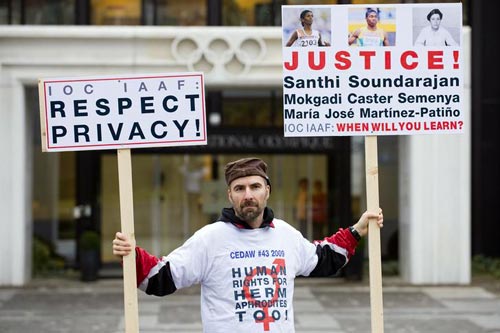 Discriminating, unfair and harmful treatment of intersexed athletes (“hermaphrodites”) in women’s sports has a long and painful history. The “suspected” athletes’ dignity and human rights keep getting violated on a regular basis by both of the ruling international sports bodies, the International Olympics Committee (IOC) and the International Association of Athletics Federations (IAAF), as well as by their subsidiaries and affiliates.

Accused as cheaters, “suspicious” athletes are denied their rights to due process, informed consent and medical privacy, arbitrarily stripped of their medals and banned from further competition without proper possibility to appeal.

Public shaming and exposure of “suspects” as “sex test failures” and “hermaphrodites” is used a regular part of the procedure, serving as a compliance tool in order to keep “dubious” athletes from competing (i.e. forcing them to feign injury, undergo surgery or “retire quietly”).

Unfortunately, since the decision to abandon the mandatory sex tests for women athletes, and replacing them with discretionary tests for individual athletes on grounds of “suspicion” or “challenge” (as the IAAF policy tellingly puts it), for (suspected) intersexed athletes the situation grew considerably worse, also due to less supervision by women’s organizations and other pressure groups.

As the recent “cases” of Santhi Soundarajan and Mokgadi Caster Semenya illustrate, athletes hailing from poor “developing countries” without actual possibilities to defend themselves against this injustice, are treated particularly inconsiderately.

Also, the IOC and the IAAF continue to advocate and impose medically not indicated surgeries and hormone treatments on intersexed athletes, even in cases where the sports bodies fail to bring forward any evidence that the athletes concerned would have any advantage from being intersexed.