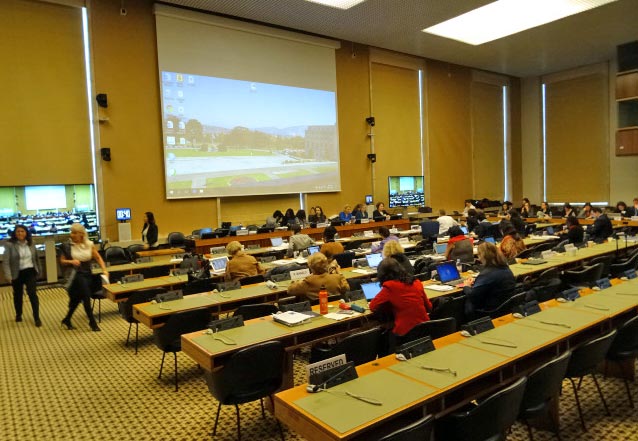 StopIGM.org together with UK intersex NGOs IntersexUK (iUK) and UK Intersex Association (UKIA)  submitted 2 comprehensive NGO Reports on the situation of intersex people in the UK to CEDAW, which demonstrate that intersex genital mutilation continues in in all 4 devolved nations, and during the Lunchtime meeting of CEDAW with UK NGOs on 25.02.2019 further briefed the Committee with a Joint Intersex Briefing Update (PDF).

During the 72nd Session of the UN Committee on the Elimination of Discrimination against Women (CEDAW), the Committee is examining the human rights record of the UK on Tuesday 26 February 2019, 10-13h CET + 15-17h CET (= 9am-noon UK time + 2pm-4pm UK time), with both Session being transmitted LIVE on webtv.un.org. StopIGM.org was reporting LIVE from Geneva, hoping the Committee will ask tough questions on IGM practices in UK!

11:55h (Video @ 1:54:35): YAY!! Committee expert Ms. Bandana Rana (Nepal) who covers CEDAW article 5 on “harmful cultural practices” just raised “intersex genial mutilation” and the lack of access to redress and justice! Notes the UK didn’t reply to the pre-session question in the List of Issues (LOI) on data about IGM. Repeats demand for statistics and asks if UK does plan to implement legislation to stop IGM and address lack of access to justice, including the statutes of limitations?

«The Committee is concerned about reports of Intersex Genital Mutilation, and the lack of redress and compensation in such cases. As the number of such procedures was also not included in the List of Issues, can you provide data on the number of such surgeries on intersex children? Do you plan to adopt legislation to eliminate this practice, and to address obstacles to access to justice, namely the statutes of limitations?»

«I would just like to start if I may a little bit out of order around the question on intersex genital mutilation. We have just issued a Call for Evidence in England where we recognise that we don’t have sufficient understanding of this issue and the issues that have affected these individuals, and we want to really understand that, and that Call for Evidence has been issued recently. So I’m afraid that I don’t have detailed answers on that today but I do [indiscernible] we’re happy to follow up with the Committee once we’ve completed that exercise.»

«My colleague has just helpfully let me know I mentioned the intersex Call for Evidence that was launched on the 17 January and it’s a 10 week Call for Evidence and it is designed to understand the experiences of people who have variations in their sex characteristics. So this is, obviously it’s an emerging and complicated area policy and we’re looking to use this Call for Evidence to help us really do the right thing and make sure the position is significantly improved for those people.»

16:21h (Video @ 1:22:12): Committee expert Ms. Ana Peláez Narváez (Spain), of CRPD13 fame, follows up on forced sterilisation of women with disabilities, as well as intersex genital mutilation (the question’s wording was perhaps not entirely clear at first, as“surgeries to reassign sex or change sex” gererally refer to consensual trans surgery, not IGM) – however, this was soon clarified in the answer, see below), what measures is the UK taking to repeal those practices?

«I also wanted to ask something else. I’m concerned by the fact that forced treatment can be used in the State party for sterilisation for example or surgeries to reassign sex or change sex. So I would like to know what measures the State party has taken in order to repeal these practices and bring it into line with a human rights based focus.»

16:37h (Video @ 1:36:52): Head of Delegation Ms. Elysia McCaffrey (Deputy Head, Government Equalities Office) answers on forced sterilisation and intersex genital mutilation, again referring to the “Call for Evidence” (which reportedly “fails to adequately consider human rights, namely the non-derogable rights to protection from harmful practices, and to justice and redress for victims”, see Joint Briefing Update (PDF, p.1, last para)), but else remains vague (and didn’t answer at all regarding forced sterilisation of women with disabilities).

(Though kudos for correctly answering on IGM.) Unofficial Transcript:

«In relation to forced sterilisation and for changing sex, I think if I understand this question rightly you were referring to intersex genital mutilation and this is something that we’re aware of the debate around and we are aware of the debate on the practice of medical interventions in this area. Really we require more govern- more evidence of the nature and the scale of this issue, and the call for evidence which I talked about earlier today should help us to determine whether and what government intervention is necessary.»

In March, the Committee will publish its “Concluding observations” with binding recommendations – hopefully including yet another strong reprimand for IGM practices for the UK! Fingers crossed!

IGM in the UK: 2018 CEDAW Report
Human Rights Violations Of Children With Variations Of Reprod. Anatomy
IGM in the UK • Statistics • Complicity of the State • Harmful Practice
>>> Download as PDF (679 kb)

IGM in the UK: 2019 Follow-Up Report (for Session)
Human Rights Violations Of Children With Variations Of Reprod. Anatomy
Impunity • International IGM Networks in the UK • Testimonies
>>> Download as PDF (430 kb)

>>> Intersex human rights at the UN are under attack!!!
>>> Intersex: How to Distinguish Medical Crimes from Health Care