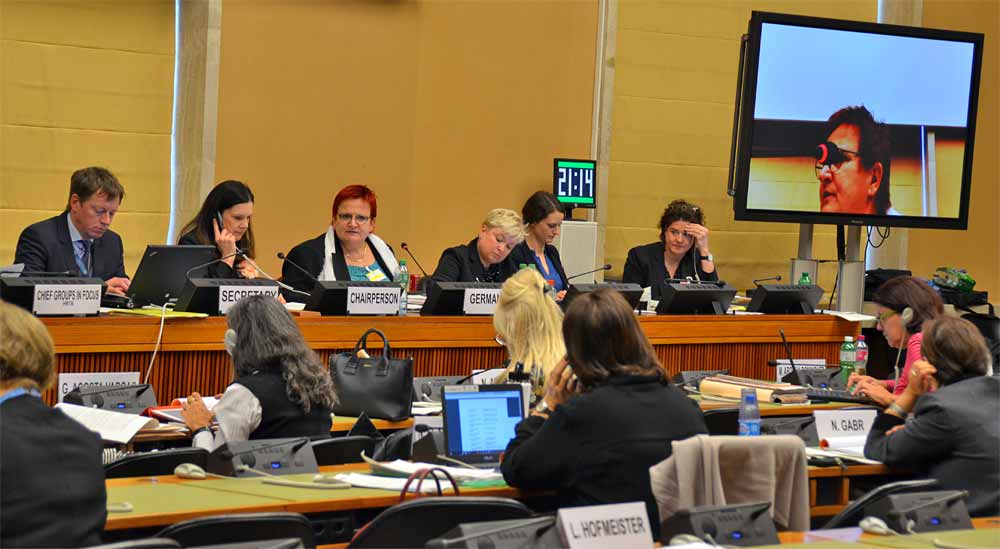 Today it’s the turn of Germany to be questioned over Intersex Genital Mutilations at the 66th Session of the UN Committee on the Elimination of Discrimination against Women (CEDAW) on Tue 21 February 10-13h CET + 15-17h   >>> VIDEO Session one | two
StopIGM.org was reporting LIVE from Palais des Nations in Geneva, expecting tough questions and yet another reprimand for IGM at the end of the session on 3 March.

11:21h: The session is well under way, questions to articles 3 + 4 of the Convention being answered, questions on art. 5 (harmful practices) coming up soon …

«I want to touch on a painful subject, that was also raised in the list of questions and issues, and that is the continuing practice of surgical procedures or other medical procedures performed on intersex infants, in an attempt to bring their physical appearance in line with the binary gender stereotypes, and in most of the times it is with the female stereotype.

This is sometimes referred to as IGM, namely Intersex Genital Mutilation, thus indicating the irreversible and often grave and lifelong consequences of the procedures which are not necessary and cannot be medically justified, and can in fact been postponed until such time, as the child is able to express his or her views on the subject. Various sources indicate that the number of these procedures is not decreasing, and as many as 1700 children are treated that way every year.

And yet there is only one counselling office in one Länder that is the Lower Saxony, and on the other hand your answers to the list of questions and issues indicate that you are aware of the problematic nature of this harmful practice, you set up an interministerial working group on intersexuality, transsexuality in 2014 and you described many deliberations, working papers, publications, including the involvement of the German Ethics Council.

So my questions are the following: One of the Ethic Council’s recommendations was that gender determining operations when the affected person cannot decide for him- or herself are to be carried out only, if they are, and I’m quoting, “undeniably in the best interest of the child”. But this is, in my view, circular. Who decides the best interest of the child in these cases?

The whole problem arises because the best interest as determined by the parents or by those with parental authority, is so often based on stereotypes. And without sufficient understanding of all the lifelong consequences, then why not adopt the principal that only clearly medically necessary life saving procedures are to be carried out?

And coming from the field of family law, I want to raise an option, that many countries had moved into introducing the legal concept, the concept of an independent legal representative for minors, lawyers for the children in issues that present challenges, perhaps conflicts between them and their parents or between them and the authorities. Why are you not considering the employment of such mechanisms.

Lastly, the Ethics Council had also recommended setting up a compensation fund, but your replies indicate that this, and I quoting again, “requires careful examination”. My question is simply why does it require careful consideration, and not set it up immediately? Thank you.»

«The question about intersex children and surgery. We have made a small step forward, now there is a new treatment guideline. It says that irreversible interventions that are not medically necessary, excuse me, I think Frau Blomeyer can add more professionally to that, but so if these interventions are not necessary medically they cannot be carried out before the child is legally able to consent.

I think it’s a bit more complicated in the German system, because physicians are no longer allowed to carry out these surgeries due to their professional codex because we always want to be up to date, and that’s why it is not legally regulated, we leave it all to the medical profession to decide in their specialties what is state of the art.

And it’s clear intersexuality is not a disease and therefore there is no medical need for these irreversible interventions. Of course there need to be exceptions, for example if the child’s benefit is at stake, if it’s a young person who is suicidal for example, then that might be an exception, but otherwise the physicians would commit an offense if they’d carry out this surgery.

In addition, we support Pro Familia projects, we’re trying to better inform parents. We are instructing them, we are informing them, telling them that it’s not a bad thing to be intersex even though it’s not the norm, but that it’s no reason to put your child through an irreversible surgery, just because the sex cannot been immediately be determined.

And the recommendation about further temporary measures whether they are necessary, in criminal court or in civil court, the government is debating about that, also about whether a compensation fund should be introduced or not.»

«I would just like to clarify, if I understood correctly, because the responses were received by us in November 2016, so these guidelines that you had quoted from are more recent than that? When were they adopted?

And then secondly, what about the possibility of establishing a fund for compensating those individuals who had undergone such medically unnecessary procedures in the past and suffer form those consequences? Thank you.»

«Second question regarding intersex persons. Listening to you I was under the impression that nothing would actually prevent your moving from the Behandlungs- – from the guidelines to a clear explicit prohibition in the criminal code, since it’s not a medical – you said it, there’s not – it’s not an illness, and if you want to prevent those operations from happening with irreversible consequences, maybe the criminal court could be a way?»

«Now I would like to ask Frau Blomeyer from our delegation to respond to Mrs. Kaddari’s questions about the guidelines, but if physicians treat against the guidelines it’s bodily harm, so they can be persecuted for or punished for bodily harm and they all know this.

It’s similar to the section 218, the abortion section in the criminal law. There women – it was tried to prevent people to abort fetuses by making the physicians – giving them the burden of the offense.

So now we need to see how we regulate this particular issue, but Frau Blomeyer will be better able to explain this to you and give you information about the circumstances of adopting theses guidelines.»

«Thank you Madame Chair, Ms. Ferner. Concerning the guidelines for medical experts from the summer 2016. They include that surgical intervention for intersex children must not be performed before the children themselves can give their consent, so before they’re able to give their consent, and on the same time their families, their parents should be peer counselled.

So when you see these guidelines in combination with the regulations, our German Civil Code that includes the sterilisation ban, and also the German Criminal Code with regard to FGM, and we have the current legislative situation that surgical interventions which are not necessary are prohibited in Germany.

The interministerial working group dealt with this in great detail, the outcome paper is expected in the summer of 2017 according to the current status of discussion.

We – our tendency is based on the legislative situation and survey that we’ve conducted, so we believe that it is important to have a mandatory counselling mechanism.

We want to ensure that all parents of intersex children receive counselling, so this does not mean that a surgical intervention, that – well this ensures that surgical intervention that aims at making the appearance of the child more male or female is prohibited already.

So the interministerial working group dealt with that and addressed this issue and as I’ve said we are still expecting the outcome paper, but there is also a legal expert report and opinion on the situation of trans and intersex people, and one of the results of this opinion is that because of the short time of expiry and limitation claims of compensation have usually expired.

So we would really have to go into this and find out how this can be solved. There’s no conclusive result yet.»

«Yes, a very short question regarding, coming back to intersex persons. I mean, if I understand rightly, you have the necessary legal background to prevent those operations from taking place. The statistics we have been given from alternative sources refer to 1700 cases per year a no diminution. So how can we put together the legal background that you refer to and this reality? Thank you.»

12:48h (@2:47): German Head of Delegation Elke Ferner claims again prohibition on IGM to be already in place (flasely claiming the non-binding medical guidelines were intalled “at the end of 2016 only”, instead of in summer 2016), so now first they’ll have to wait for the 2017 statistics, and if IGM still doesn’t decrease, they’d have to “talk to the doctors again” … 😮 Unofficial Transcript (simultaneous translation from German):

«Miss Blomeyer just said that the directive was enforced in – at the end of 2016 only.

And if that is the case, we will have to get in touch with the medical associations again, because we assume that the surgical interventions that have been taken place so far, were not all necessary to save lives.»

16:48h (@1:47): Ruth Halperin-Kaddari follows up once more on IGM, criticises “evasive answers”, and that Germany could be expected to do better …YAY!!  🙂 Unofficial Transcript:

«And I have to express also the wonder, this is related to the question that I raised in the morning session about the possibility of allocating a compensation fund to people who had previously undergone the intersex surgery involuntarily and the recommendation that was given to compensate them, and again, the answer was somehow evasive of the issues, and with all due respect, I think Germany is a country from which we can expect some – I’m sorry for missing the proper word, but going forward in these cases, even if the strict letter of the law maybe is not necessarily required that.»

«Regarding the compensation fund for victims of non-reversible surgeries, like I already said, we are at the moment still deliberating within the inter-ministerial working group, we are still discussing whether there will be such a fund. We simply haven’t arrived at a decision yet, so that is why I’m unable to give a very specific answer to your question today.»