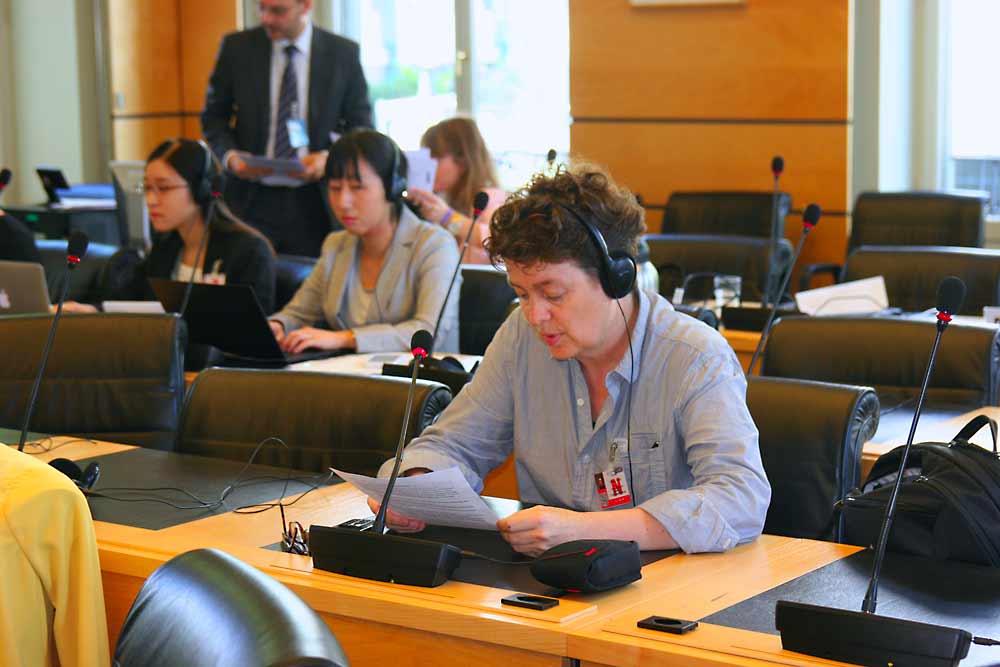 At the 120th Session of the UN Human Rights Committee (HRCttee) as the Treaty body monitoring implementation of the International Covenant on Civil and Political Rights (CCPR), before Switzerland was questioned over Intersex Genital Mutilations, NGOs had the possibility to brief the HRCttee in a closed meeting.

I was born 1965 in Switzerland, with so called “ambiguous” genitalia. The doctors couldn‘t tell if I was a girl or a boy.

First they cut me open between my legs to see, if they find a vagina.

At two months they opened my abdomen and found healthy testes, which they threw in the garbage bin, without telling my parents.

At seven they cut my genital to make me look more like a girl, allegedly with my consent. Today they probably would make a boy out of me, by even more surgeries.

The doctors always lied to me and my parents. I spent my life in fear, pain and shame. I couldn’t talk to anybody.

Only at 35 I discovered that I am not alone and that there are self-help groups.

At 42, I was lucky to obtain my medical records, but only after a long hassle, and with statutes of limitations long expired.

I still suffer from periodical pain between my legs, hypersensitivity, and painful scars.

I did ten years of psychoanalytic therapy, otherwise I wouldn‘t be here now.

While all surgeries were paid for in full by the State, for the psychotherapy I had to pay a third by myself.

As substantiated in our 2017 NGO report, [1] in Switzerland all forms of Intersex Genital Mutilations are still perpetrated with impunity, paid for by the Swiss federal Disability Insurance, while adequate psychosocial support is still not available.

However, the Swiss State party can no longer in good faith claim ignorance of the severity of the human rights violations perpetrated against intersex children.

In 2012, the Swiss National Advisory Commission on Biomedical Ethics (NEK-CNE), having been tasked by the Swiss Federal Government, recommended a legal review into
1. prohibiting the practice
2. ensuring access to redress andc ompensation, and
3. to provide access to free counselling.

In 2015 and 2016 Concluding observations CRC, CAT and CEDAW recognised IGM in Switzerland to constitute ill-treatment and a harmful practice, and explicitly obliged the State party to take effective legislative, administrative, judicial or other measures to implement above Ethics Commission recommendations.

However, despite in the 2016 State report to this Committee for the first time acknowledging that IGM practices have been “denounced […] by the Federal Parliament and Council as well as by the National Ethics Commission”, and in a Federal Council statement on the Ethics Commission recommendations further acknowledging that IGM practices result in “considerable consequential damage and severe suffering”, to this day the Swiss State party undeviatingly refuses to take effective measures, but instead counterfactually claims,

Accordingly, in 2017 votes on a petition by our NGO, both the Council of the State [3] and the National Council [4] refused to legislate against IGM practices, referring to above counterfactual claims. Although both chambers conceded that “premature unnecessary” genital surgery “constitutes a violation of the right to physical integrity”, they nonetheless claimed, “We believe medical professionals are nowadays sufficiently sensitised to the issue and only undertake such interventions when they are justified.” [5]

However, the true state of awareness of the medical profession is illustrated by a current “review” of the medical practice at the Zurich University Children’s Hospital funded by the Swiss National Science Foundation, [6] where the so called “interdisciplinary team” in charge consists mostly of doctors actively involved in today’s treatments while persons concerned are not represented, enabling the Hospital to destroy about 80% of its historic medical files on IGM practices, including those of a member of the self-help group, [7] thus depriving him of his last chance to ever learn what exactly was done to him at at the Department of Surgery when he was five. [8]

We therefore hope the Committee will ask the Swiss delegation tough questions on IGM, and will sternly remind Switzerland of its obligations under the Covenant, art. 7 and 24, and the general comment No. 20.