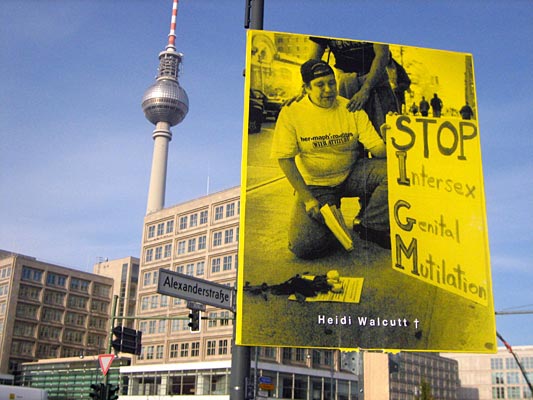 Today, for the 10th time Intersex People, Survivors, Partners, Families, Friends and Allies around the globe celebrate Intersex Awareness Day, commemorating the very first INTERSEX PROTEST in Boston in 1996 against the Annual Convention of the American Academy of Padiatrics (AAP), and in support of now 20 Years of Organised Struggle to End INTERSEX GENITAL MUTILATIONS.

STOP IGM Primer:  What everyone should know about Intersex Genital Mutilations,
the ongoing 20 Year Fight to End it,
and today’s 17 Years of Peaceful Intersex Protests!
>>> Download (PDF 1.95 MB)