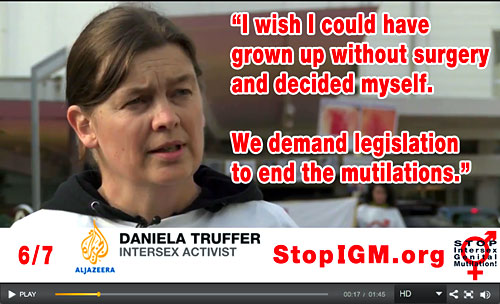 >>> TV-Interview with Daniela “Nella” Truffer (Zwischengeschlecht.org) on occasion of the “3rd Gender Hoax in Germany” media frenzy during the first half of this soundbite-sized news-clip. As always, Daniela says it as it is, bearing witness to western genital mutilation no matter how hard it is, year after year, exposing the gruesome practices usually hidden from the view of ordinary citicens, calling for justice. A transcript of the whole Interview can be found after the break.

Below the video there’s an AFP news report, featuring Lucie Veith (Intersexuelle Menschen e.V.) stating clearly that “the cosmetic genital surgeries for newborns must be forbidden altogether”. The Report also quotes the recent resolution by the Council of Europe, calling for legislation as well.

Many thanks to everybody who spoke true to the media about the mutilations! 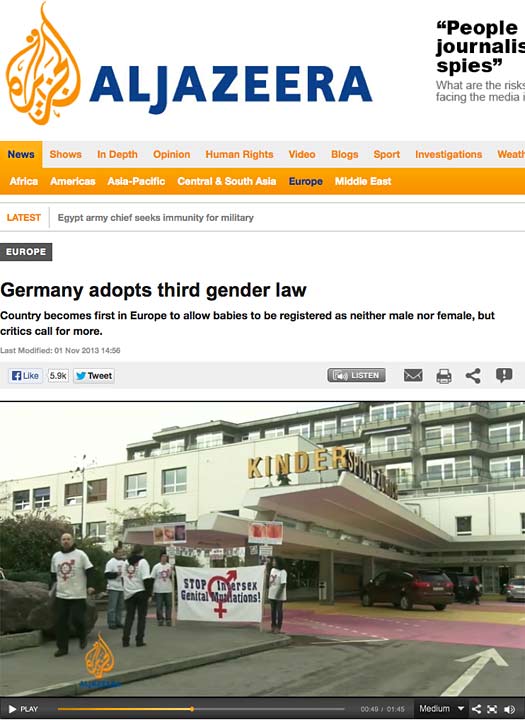 – You were also born as an intersex person. Could you please tell us your story?
– How were you treated when you grew up?
– When were you operated on and why?
– What consequence did this operation have for you then and now?
– What would you have wanted your parents and doctors to do?
– Do you still feel confronted with prejudices in your every day life?

I was born with so called atypical genitalia.
The doctors couldn’t tell if I was a boy or a girl.
At two and a half months they castrated me, they threw my testicles in the garbage bin.
When I was seven they cut off my genital to make me look more like a girl.
The doctors always lied to me and my parents.
I spent my life in fear, pain and shame. I couldn’t talk to anybody.
Only after meeting others like me I found out that I wasn’t alone.
I wish I could have grown up without surgery and decided myself.
When I started to talk about the mutilations to the media I lost my job.

– What do you think about Germany’s new law?
– Do you think it addresses the core issues of intersexual people?
– Why do you say it discriminates against people?

This new law is stigmatising, bound to result in more pressure on parents and more intersex genital mutilations.
Persons concerned were NOT consulted. We demand legislation to end the surgeries.
For 60 years now, western states condone clitoris amputations on intersex babies.
In June 2013, the German parliament approved the doctors to continue.