As a survivor of Intersex Genital Mutilations, I am particularly grateful to be able to speak here today.

I was born in 1965 with abdominal testes and so called “ambiguous” genitalia.

At two months they removed my healthy testes and threw them in the garbage bin. At seven they cut my genital to make me look more like a girl, allegedly with my consent. At 12 I was prescribed estrogens to induce an artificial puberty, which I still have to take daily.

Today they would probably make a boy out of me, with even more surgeries, complications, and pain.

The doctors always lied to me and my parents. Only at 35 I discovered that I am not alone. Today I am fighting to prevent future intersex children from suffering like myself and my peers. 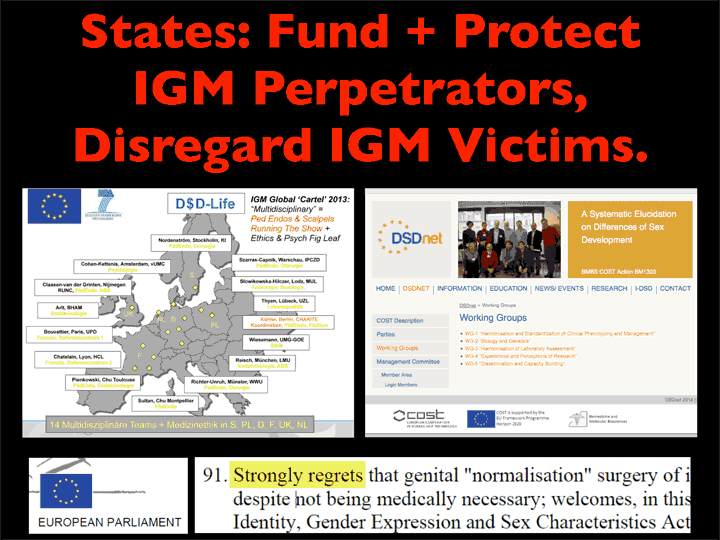 One of the most frustrating experience in my work is, how nowadays everybody seems to be caring for or at least talking about intersex, but hardly ever about IGM practices, let alone how to eliminate them.

I have to admit I was really irked by the Swiss Government’s press release for the Focal Points Roundtable, where they boast how Switzerland would be, I quote, «expressly extending protection to intersex persons» – that is, as long as it’s limited to, I quote, «discriminations based on sexual orientation or gender identity» – for most intersex people basically a non-problem.

On the other hand, regarding the undisputed intersex problem number one, IGM practices, Switzerland simply denies them, while in fact funding and protecting the perpetrators, not the victims – just like any other so called “developed nation”.

Currently, the UN Committee against Torture questioned Austria, Denmark and China over IGM. All countries flat-out denied the well-documented ongoing practice, while at the same time invoking «leadership in LGBTI issues». 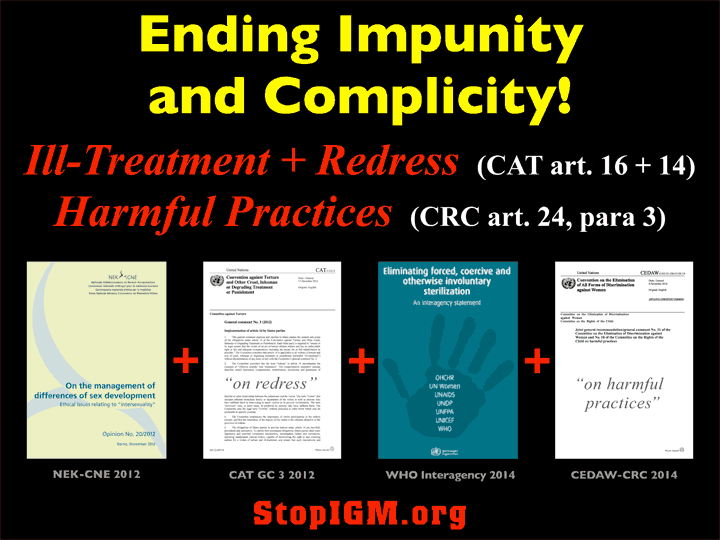 One last example, the current “Intersex Focus Paper” by the EU Agency for Fundamental Rights, which simply fails to identify ANY relevant human rights frameworks or UN documents.

While the paper goes on and on about identity, gender and birth certificates – it NOT ONCE mentions harmful practices, inhuman treatment, legislation to end IGM, access to redress and justice, statutes of limitations, monitoring, or other crucial items for advancing intersex rights.

Tellingly, the FRA’s only legal recommendation concerns birth certificates and identity documents – while regarding IGM, they seriously propose having nice chats with the mutilators and their accomplices.

So, I would like you to consider for a moment:

Are you and your agency able to adequately address IGM practices, including as harmful practice and inhuman treatment – or are you only fit to address discrimination and identity?

In the first case, I would like to win you as a vital intersex ally.

In the second, I ask you to at least do better than the Swiss Government, falsely claiming to «expressly protect intersex persons». 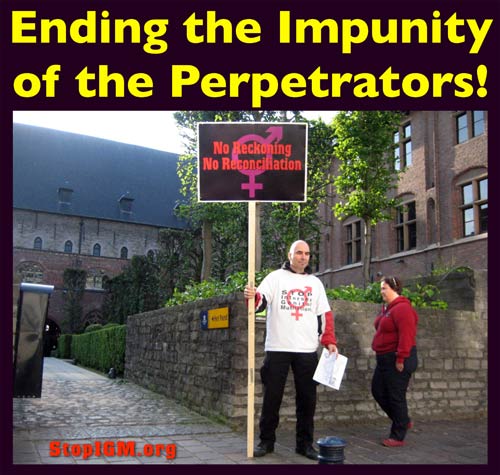 Exploring the the possibilities of eliminating IGM practices by making the perpetrators accountable via well-established applicable human rights frameworks, including Inhuman Treatment and Harmful Practices @ the UN expert meeting on Intersex Human Rights in Geneva 26.–27.10.2015