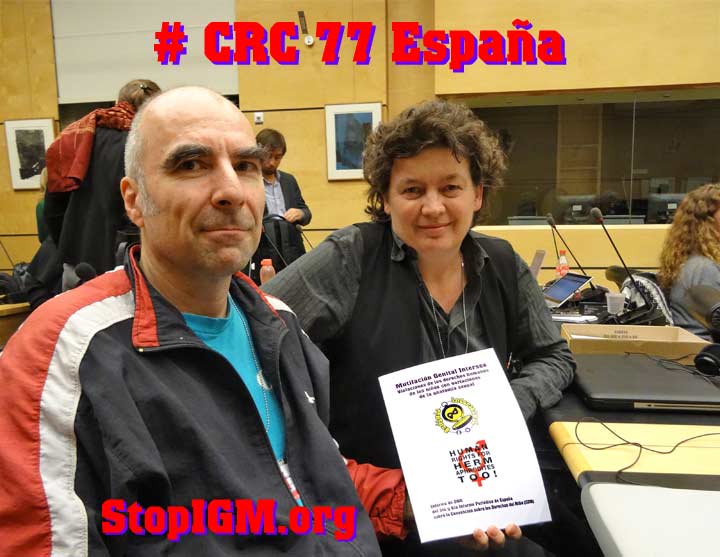 During its 77th Session the UN Committee on the Rights of the Child (CRC) examined Intersex Genital Mutilation (IGM) in Spain. Intersex NGOs StopIGM.org and Brújula Intersexual, in collaboration with Spanish IGM survivors and parents, provided the Committee with compelling evidence of IGM being practiced allover Spain today, including in public university children’s hospitals in Madrid (despite a pro-forma law against it), Barcelona and Málaga.

The Committee has now sternly reprimanded Spain for IGM.

In its Concluding Observations, CRC not only condemned IGM in Spain as a “harmful practice” according to the Convention (CRC art. 24 (3) – like FGM), but further explicitly obliged Spain to “prohibit” the practice, and to “ensure that intersex children and their families receive adequate counselling and support”! (Full binding CRC recomemendation see below.)

“These joyful and encouraging even numbers should not detract from the alarming fact that intersex human rights at the UN are currently in a state of crisis: Massive instrumentalising and misrepresentation of intersex and IGM by LGBT and transgender NGOs have so far nearly cut in half the number of new UN Concluding observations, namely from 13 recommendations in 2016 to a mere 7 in 2017, with some Committees effectively having stopped issuing further recommendations altogether.

Nonetheless, as these strong new recommendations by CRC demonstrate, if intersex people and organisations stand united, provide solid evidence, and clearly and strongly refuse instrumentalising and misrepresentation by 3rd party groups, UN Committees will still recognise intersex human rights, and continue to unmistakably condemn IGM practices as the serious human rights violation that they are.”

24.  The Committee recommends that the State party prohibit unnecessary medical or surgical treatment from being performed on intersex children, when  those procedures entail a risk of harm and can be safely deferred until the child can actively participate in decision-making. It also recommends that the State party ensure that intersex children and their families receive adequate counselling and support.”