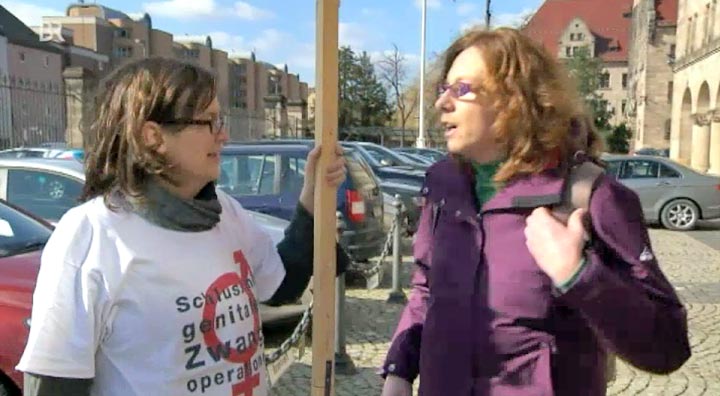 On Thursday, 22 October 2015 the Nuremberg Court – yes, the Nuremberg Court! – will witness another piece of Intersex History, as the case of Michaela “Micha” Raab vs. her former surgeon and his University Clinic Erlangen, dubbed the “Nuremberg Hermaphrodite Lawsuit” by supporters and media, continues with a second public hearing: For the first time ever IGM doctors directly involved in the treatments in question will be personally summoned and interrogated before a court!

Micha Raab is only the third survivor of IGM practices worldwide to succeed in suing her mutilator, and the first in Germany to succeed in suing also the University Clinic facilitating the deed; and her case is only the fourth IGM case reaching a court at all (together with Christiane Völling in Cologne winning 200,000 Euros damages in 2007-2009, the still ongoing #justice4MC case in the U.S., and another ongoing case in Munich, where the claimant so far asked for the proceedings not to be made public) – a stark testament to the factual impunity of IGM perpetrators, including doctors, clinics and other responsible bodies and persons, which has been criticised by survivors, the Swiss Ethics Commission (NEK-CNE) and several UN Bodies, including the Committee against Torture (CAT), already in 2011 explicitly calling on Germany to “Undertake investigation of incidents of surgical and other medical treatment of intersex people without effective consent and adopt legal provisions in order to provide redress to the victims of such treatment, including adequate compensation” (see CRC NGO Report, PDF, p. 28-29).

Zwischengeschlecht.org / StopIGM.org will support Micha Raab with a peaceful intersex solidarity rally in front of the Nuremberg court just before the hearing.

How much longer?!  Enough already with mutilating intersex people with impunity!!!