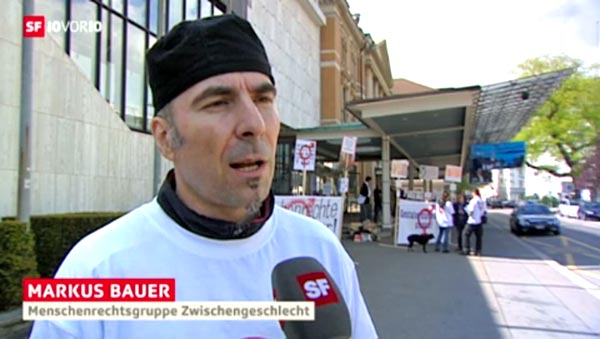 Markus Bauer (Zwischengeschlecht.org) is an invited speaker at “Genital Autonomy 2014” / Abstracts (PDF) in Boulder (Colorado), July 24-26. Together with fellow activist Hida Viloria (OII), Markus will represent intersex issues at GA 2014.
“Genital Autonomy”, established in 1989, is a bi-annual international symposium on children’s rights promoting interdisciplinary dialogue about genital cutting practices of male, female, and intersex children. The last symposium’s (abstracts, PDF) speakers on intersex in 2012 were Julius Kaggwa (SIPD, Uganda) and Mika Venhola (youtube-interview), and the symposium issued the 2012 “Helsinki Declaration of the Right to Genital Autonomy”.

In 1950, systematic early cosmetic genital surgeries on children with variations of sex anatomy were introduced in North America and Europe, and eventually became the de-facto medical standard all over the ‘developed world’. In 1993, survivors started organising against this practice, deploring loss of sexual sensation, framing the non-consensual surgeries as grave human rights violations, namely against the right to physical integrity, and as Intersex Genital Mutilations (IGM), calling for legislation.

Since 2012, after a resurgence of political intersex activism including use of nonviolent action, human rights mechanisms, and lawsuits against perpetrators, this call for legislation has finally been recognised as legitimate and necessary by national and international ethics and human rights bodies, and echoed in parliament.

I’ll analyse the ongoing 20-year-struggle to end IGM in terms of grassroots’ models of social movements, and discuss how an emerging global intersex social movement can succeed in banning IGM within the next decade.