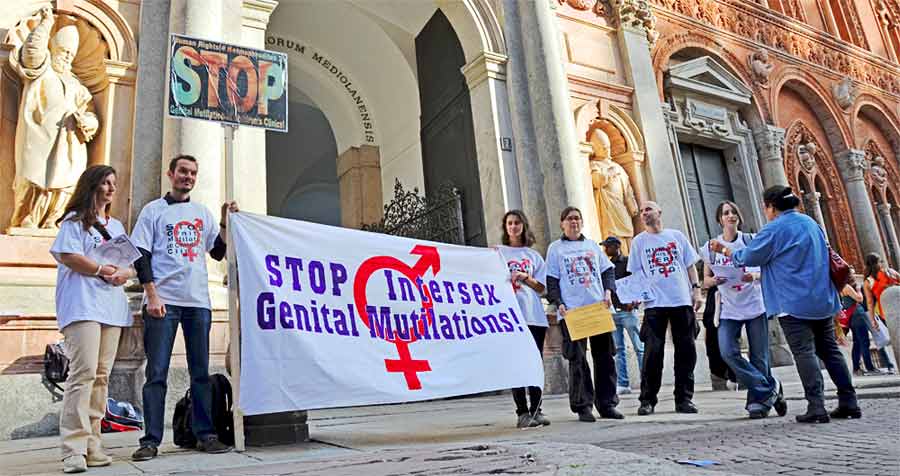 During its 16th session the Committee on the Rights of Persons with Disabilities (CRPD) examined IGM practices in Italy as a breach of Art. 17 CRPD “Protecting the integrity of the person”. Italy openly admitted to “operations” on intersex children most often “conducted […] under the age of 10”, though firmly denied “unnecessary mutilations” and “loss of procreation capacity”. CRPD already reprimanded Chile for IGM under Art. 17 earlier this year, and Germany in 2015.

The CRPD16 verdict on Italy is due September 2 – fingers crossed!

All relevant CRPD intersex documentation on Italy so far after the break.

The entire CRPD73 review of Italy can be streamed from webtv.un.org:
>>> Session 1 EN | Orig     >>> Session 2 EN | Orig    (In case anyone knows how to download the entire video like one could previously at treatybodywebcast.org, an email to seelenlos_at_zwischengeschlecht.info would be appreciated!)

According to the >>> UN Press Release in French – which fails to explicitly mention intersex – during Session 1 of the dialogue with Italy on 24 August 2016, CRPD expert Diane Kingston asked Italy about the “persisting practice of irreversible surgery on [intersex] children” which “the Committee on the Rights o the Child demanded to stop”, and particularly asked for Italy’s position on “parents consenting to medical experiments”:

“The approach in Italy to intersex children was that sexual disorders were linked to genetic background at birth and chromosomal disorders.  In 2014, there were 34 operations on intersex children, of which 23 had been conducted on children under the age of 10.  The Italian recommendations on bioethics had developed recommendations for health professionals in order to avoid unnecessary mutilations and prevent the loss of procreation capacity. ”

IGM practices were already in 2015 included in CRPD’s >>> List of Issues (LoI), para. 18 (= written questions by CRPD to Italy before the session):

18. Please provide information on the number of children who have had surgery for intersex variation without their consent, as well as other medical treatment without free and informed consent.”

In its >>> Answers to the LoI, para. 36, Italy freely admitted to the practice, though the numbers dislosed for 2014 were suspiciously low, and zero references for the allegedly “available data” were included:

“Protecting the integrity of the person (art. 17)
Reply to the issues raised in paragraph 18 of the list of issues

The dubious source of the data on IGM provided by the State party was also noted in the >>> submission for the session by the NGO Italian Disability Forum:

18.    Please provide information on the number of children who have had surgery for intersex variation without their consent, as well as other medical treatment without free and informed consent.

Representative DPOs do not have access to such data, nor have ever been involved in the matter.”

Evidence of IGM practices persisting in Italy documented in the >>> 2013 Open Letter to ‘ESPE’, ‘LWPES’ and Italian DSD Universities and Clinics and the >>> 2015 German Intersex NGO Report by Zwischengeschlecht.org was informally shared with CRPD by StopIGM.org in 2015.

The invoked >>> Article 17 CRPD in its entirety:

“Article 17 – Protecting the integrity of the person

Every person with disabilities has a right to respect for his or her physical and mental integrity on an equal basis with others.”

The CRPD16 verdict on Italy is due Friday, 2 September 2016, to be published here – fingers crossed!