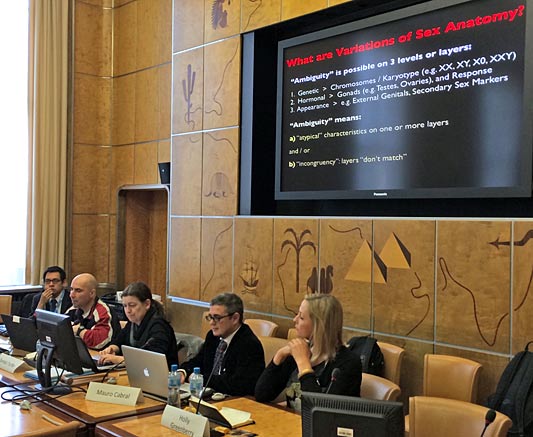 Child Rights Network Switzerland:
Second and third NGO report to the Committee on the Rights of the Child

Since 1950, children with atypical sex anatomies (intersex, DSD, hermaphrodites) are systematically subjected to irreversible, medically unnecessary interventions in an attempt to fix their sex. Such interventions include cosmetic genital surgery, castration, sterilisation and hormone treatment. Swiss clinics were significantly involved in the global propagation of “genital correction surgeries”. As female sex organs are surgically easier to shape than male organs, most children were made into girls, often by amputating their “enlarged” clitoris. Parents were misinformed, kept in the dark and received no appropriate support. Treatment of such nature leads to serious physical and psychological complications. For the last 20 years, victims and NGOs have been criticising these interventions as a massive violation of human rights, including the right to physical integrity, denouncing them as “intersex genital mutilation”. The UN-Committees CEDAW and CAT, the UN Special Rapporteur on Torture (SRT), the UN High Commissioner for Human Rights (UNHCHR), the Council of Europe (COE) and the National Advisory Commission on Biomedical Ethics (NEK) criticise these interventions as a violation of human rights and demand legislative measures (NEK, SRT, COE), historical reappraisal, acknowledgement by society of suffering inflicted (NEK) and compensation for victims (NEK, CAT).

–– to implement the full range of recommendations by the National Advisory Commission on Biomedical Ethics “On the management of differences of sex development” (intersex, DSD), to consider legislative measures banning cosmetic genital surgery on intersex children, to conduct a historical appraisal of the human rights violations inflicted on intersex children and youth in society, and to compensate victims in an appropriate manner;

(Unfortunately, all the subheaders in the section on mutilation were ‘lost in translation.’)

In addition, we made sure that on p. 15 of the report “Intersex” was not only mentioned in the assessment, but the “I” also added in the subheading and in the recommendations. 😉

Thanks to everybody who contributed to make this happen! As far as we know, this is the 4th time in a NGO/NHI Report to the CRC that cosmetic genital surgeries on intersex children were criticised as a serious human rights violation, and the 2nd time that IGM was actually named and spelled out!