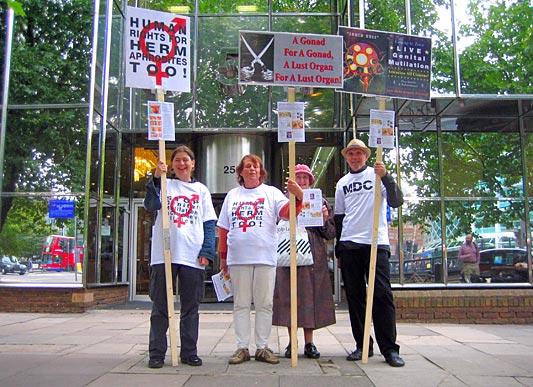 Doctors at the ‘4th International DSD Symposium’ starting today advocate ‘genital corrections’ on toddlers described by the UN Special Rapporteur on Torture as ‘rarely medically necessary, can cause scarring, loss of sexual sensation, pain, incontinence and lifelong depression and have also been criticized as being unscientific, potentially harmful and contributing to stigma.’ (A/HRC/22/53, paras 77, 76, 88)

Like at the 3rd ‘Symposium’ in Germany in 2011, the arriving doctors will be greeted by peaceful protests lead by survivors of such surgeries, reminding them that it is NOT OK to mutilate defenceless children.

A fact also reaffirmed by an Open Letter (PDF) with 58 signatories as international as the ‘Symposium’ itself, comprising persons affected, their organisations, partners, families, friends and allies, including renowned academics like Professor Milton Diamond.

While the 4th ‘Symposium’ as a commendable late addition features a small ‘Family/Support Group Parallel Session’ (a first!), one crucial element is still lacking:

Like its predecessors, the ‘4th I-DSD Symposium’ utterly fails to include ethics and human rights considerations in its ‘Scientific Programme.’

A shame that falls back not only on the ‘Symposium’ itself, but also on its sponsors UK Medical Research Council, University of Glasgow, ‘Scottish DSD Network’ (formerly ‘Scottish Genital Anomaly Network’) and Yorkhill Children’s Charity, which will also be targeted by the protestors.

The international human rights group Zwischengeschlecht.org demands the prohibition of forced genital surgeries on children and adolescents with ‘atypical’ sex anatomy and “Human Rights for Hermaphrodites too!”

One to two in 1,000 children are born with ‘atypical’ or ‘ambiguous genitals.’ 90% of them are still submitted to non-consensual cosmetic genital surgeries and other invasive medical interventions at a very early age—without actual medical need, without evidence of any benefit for the recipients, but in blatant violation of their human rights.

The doctors call it ‘clitoris reductions,’ ‘penile reconstructions’ and ‘surgical challenges,’ hellbent on ‘correcting’ what they deem ‘too big clitorises’ and ‘imperfect penises’ as quickly as possible, putting pressure on confused parents to ‘fix’ the ‘disorder.’

Survivors experience these procedures as ‘Western Genital Mutilation’ and have been protesting against these systematic, massive and irreversible practices as a gross violation of physical integrity for over 20 years.

Yet still most paediatric endocrinologists and surgeons turn a blind eye to their victims’ pleas–as well as to the mounting evidence-based data on the negative impact of these irreversible cosmetic genital surgeries.

Case in point: The speakers and chairs of the ‘4th International DSD Symposium’ starting in Glasgow today (for referenced examples see the Open Letter, p 2).

>>> 7 Peaceful Protests: All the Dates, Places and Times