>>> A recent Exploratory Study illustrates how parents who ‘decide’ to ‘consent’ to submitting healthy intersexed infants to mutilating cosmetic genital surgeries do so heavily due to biased medicalised information provided by doctors: 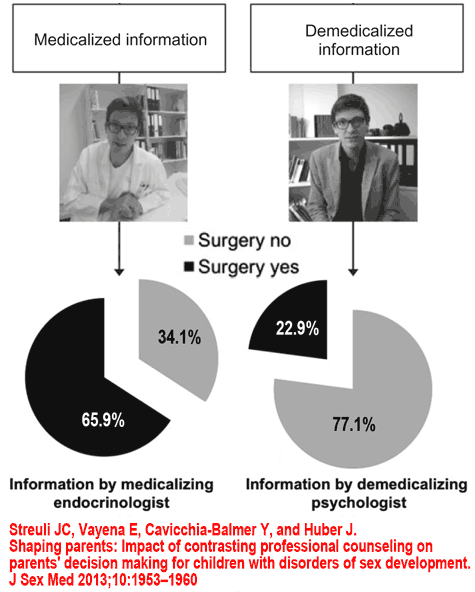 Zwischengeschlecht.org is pleased to have contributed to this study, directly by taking part in the initial focus group to identify demedicalised vs. medicalised counseling (the ‘activists’ credited in the paper), as well as indirectly since the focus group as well as the whole project taking off were not least a result of increased public pressure due to our nonviolent protest in front of the Zurich University Children’s Hospital which attracted considerable media coverage.   More on the study after the break …

The study also echoes Suzanne Kessler’s important 1998 findings, that parents are in a conflicting situation which usually prevents them from being able to objectively assess the best interests of their intersex child when ‘consenting’ to cosmetic genital surgeries (‘Lessons from the Intesexed’, p 100-104).

Notably, the ‘parents’ assessed in this study, whether they ‘chose’ surgery or not, universally ‘believed their decision was based mainly on their own values, opinion, and attitude‘ (p 1956), despite the significant correlation to the information available to them beforehand.

However, it seems safe to assume that the still predominant medicalised counseling of parents mainly by paediatric endocrinologists (often joined by a paediatric surgeon) contributes heavily to the still massive global scale of daily Intersex Genital Mutilations (IGM), as well as the general lack of public knowledge – and last but not least the lack of psychosocial specialists in children’s clinics that would actaually be in a position to inform parents in a demedicalised fashion.

>>> IGM Primer: What everyone should know about Intersex Genital Mutilations!