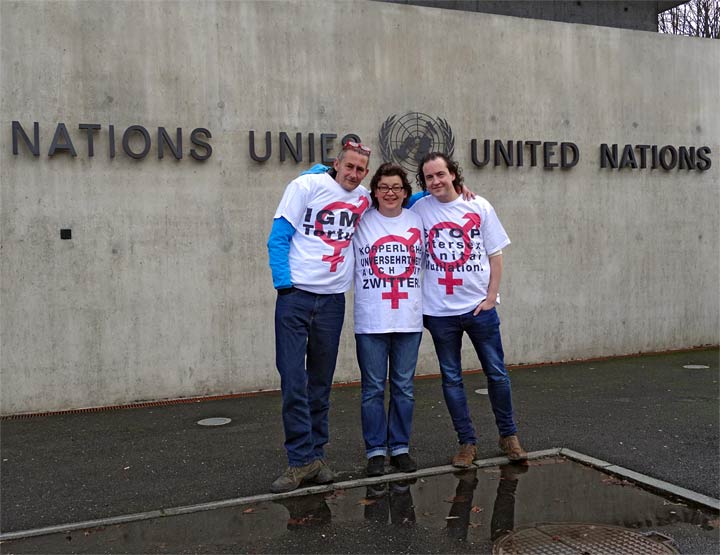 Ireland was the second country coming up for review of IGM practices at the 71st session of the UN Committee on the Rights of the Child (after France).

Thu 10:05h: The Session with Q&As on Intersex Genital Mutilations with the Irish Delegation is open, live transmission is on!

Thur 10:39h: Committee Member Gehad Madi, one of the Country Co-Rapporteurs of the Committee for Ireland, brings up Intersex Genital Mutilations and lack of measures to ensure physical and mental integrity, autonomy and self-determination for intersex children in Ireland! YAY!!

«We are also noting that there are discriminations against intersex children, including reports of Intersex Genital Mutilation, and the lack of appropriate legislative, administrative and other measures to insure the right of intersex children to physical and mental integrity, autonomy and self-determination.» 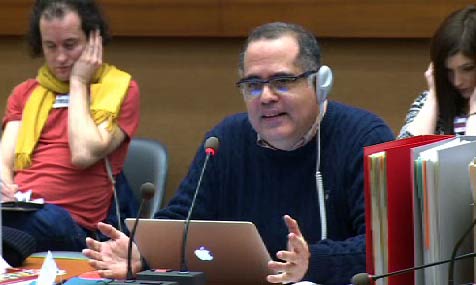 «I would also like to address the topic of intersex children. I’m addressing this point under this heading [violence against children] because, whilst this could be considered from a health standpoint, it would also be worth considering it from the point of view of violence against such children. And in particular I would like to know whether you exercise any form of oversight on the basis of the legislation over publicly operated sector health facilities with a view to ensuring that there’s a prohibition of irreversible surgical interventions of non-consensual treatment imposed on intersex children. In short: are you ensuring, do you have oversight to avoid the use of such practices? Do you indeed consider that this is a problem that needs to be addressed?» 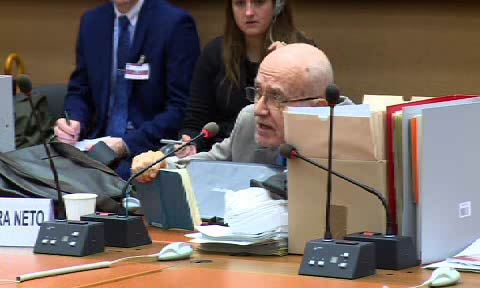 «Very good morning to you all. I would like to wish an especially warm welcome to the Irish Delegation and also my greetings to our chair, Miss Aldoseri. I would like to ask a follow-up question to Mister Rodriguez’ question about intersex children. So my question is as follows: I would like to know, if there is a possibility to provide compensation to those children who have been subject to surgery without their prior and expressed consent. That’s my question, thank you.»

Thu 12:10h: A member of the Irish delegation says he’s going to answer questions on transgender and intersex, gives answers on transgender, then says he’ll come back to intersex later – how typical is that?! 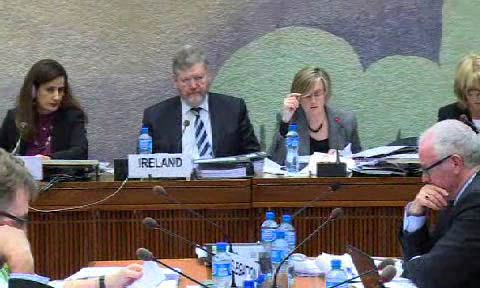 «There was a number of matters that were raised in relation to intersex children so I’d ask my colleague from the department of health to take that topic, thanks Colm.» 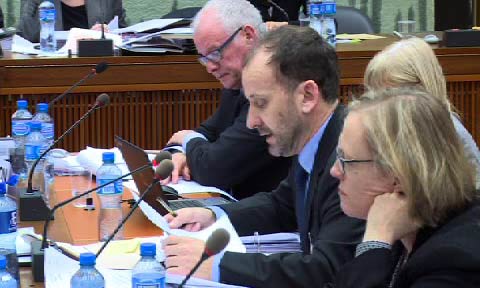 Thu 15:15h: Irish Delegation member Colm Desmond (Department of Health, Principal Officer Mental Health Unit (!!)), answering on intersex, went the route of denial, downplaying intersex as “very, very rare,” and claiming in Ireland only medically necessary treatments were undertaken with the consent of the parents, so the issue of compensation would not normally arise – totally evading the actual questions, while at the same time admitting to IGM still taking place in Ireland – twice!

«Hello. Thank you. A number of issues in relation to the department of health and forcely in relation to intersex children, were choices made at birth. These situations highlighted by the committee members are very, very rare and the decisions taken in relation to choices are very often, I understand, determined by a physical or renal need rather than a gender assignment need. It usually is taken by a consultant dealing with that on the basis of very detailed case management, as would be the normal case with very sensitive birth or natal conditions, natal situations involving an intersex case. We would not see that the issue of compensation would normally arise, but the normal medical negligence provisions around compensation of course apply in Ireland.» 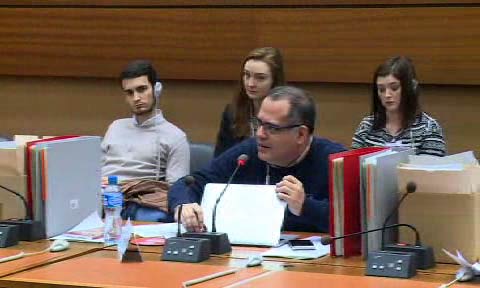 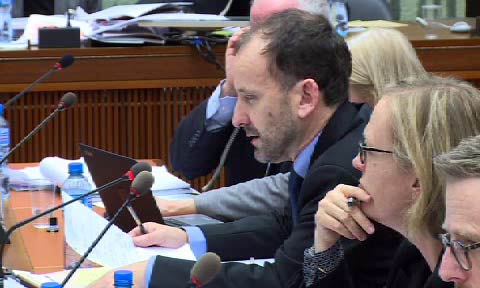 «The answer is where the issue of intersex situations has been highlighted, our view is that this is an extremely rare situation that arises, and where an intervention is needed it may often be for reasons around renal or physical needs in the case of the individual child. And that decision is usually taken following very careful consultation between the consultants in that particular case, and all of the necessary expertise would be brought to bear on decisions around intersex in case conferences. On that basis we consider this is a very rare issue but we do acknowledge that these decisions are taken on a medical basis in these rare cases. In relation to the issue of compensation we are not aware of a specific compensation process, but normal medical negligence compensation processes apply in Ireland and it would apply in any case of an alleged medical negligence.» 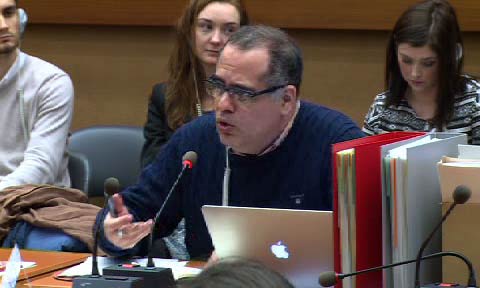 «Now, in terms of intersex children I have heard that a consultation may take place, but I wonder whether that implies consent on the part of the child, who may, given the circumstances, be subject to an operation. Thank you.» 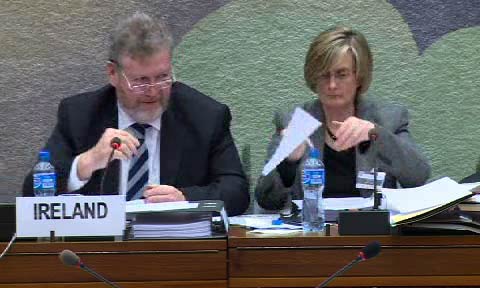 Thu 15:46h: This time the Head of the Irish Delegation, Minister Dr. James Reilly (Children and Youth Affairs, medical doctor by profession) intervened, reiterated the blanket denial plus downplaying intersex as “extremely rare” and claiming interventions would only be done to “sort serious anatomical and physiological difficulties” – while at the same time openly admitting to IGM also in Ireland mostly being practiced on “very young babies” – according to his own personal “experience”:

«If you forgive me to intervene, because my previous job was minister for health, and I am also a doctor by profession. Can I just say in relation to intersex: this is very rare, that it’s a clinical decision to intervene, that consent from parents has to be obtained, that’s very, very clear. I think if you relate to the consent of the child you’ll obviously have to be talking about older children. And to my knowledge these operations do not take place later in life, unless there is some really compelling anatomical functional issue that has to be addressed. Now, I can stand be corrected on that, but that’s my experience in practice. And I can absolutely state that these matters should – don’t occur without the consent of the parents. So, very often we are talking about very young babies here, very very young children, who have a serious anatomical, physiological difficulty to be sorted out, and that’s the basis on which these procedures might be carried out. But I want to emphasis again, that it’s extremely rare.»

My 2 cents: Yet another flat-out Gov denial – while at the same time freely admitting that IGM practices still take place – how telling is that?!
Fortunately, the Committee once more proved to be well-informed, and determined to get to the bottom of the serious human rights violations against intersex children. So I’m quite confident that these non-answers will again lead to particularly strong “Concluding Observations” – for Ireland due on 29 January. To be continued …