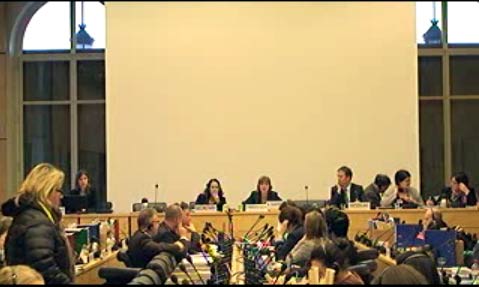 StopIGM.org reporting live from the 68th Session of the UN Committee on the Rights of the Child (CRC) at Palais Wilson in Geneva:

The periodic review of Switzerland regarding the UN Convention on the Rights of the Child on 21–22 January 2014 marked the first time that the Committe touched upon the topic of IGM practices. After having received two more NGO reports broaching the issue in the wake of Switzerland’s replies to the Committe’s List of Issues (LoI), one by Child Rights Netwok Switzerland as well as another thematic report by Zwischengeschlecht.org (endorsed by Swiss Self-Help Groups Intersex.ch and SI Intersexualität, and Women’s Rights NGO Terre des Femmes Switzerland), the Committe had issued a rare invitation to Zwischengeschlecht.org for a one hour Briefing on “Intersex Genital Mutilations on a Global Scale”  (>>> PDF 3.19 MB), which was also attended by representatives of the Committe on the Rights of People with Disabilites (CRPD) and the Office of the UN High Commissioner on Human Rights (OHCHR). 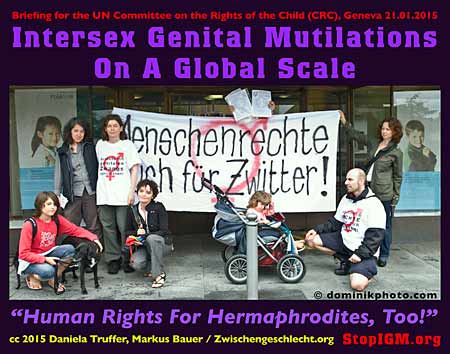 The briefing offered an overview on IGM practices and their histoy as well as a survivor’s perspective and an introduction to 22 years of Intersex Activism, arguing the case for recognising IGMs as a harmful practice and developing a holistic framework to eliminate all relevant non-consensual unnecessary interventions. (>>> PDF 3.19 MB) Taking place in the same conference room just before the start of the review of Switzerland, the briefing went rather well and attracted many productive questions.

What’s more, during the following review, at the very end of the first round of questions, the chair of the Committee, Kirsten Sandberg broached the topic, criticising early intersex surgery as a “harmful practice”, and asked if Switzerland was aware of the ongoing non-consensual interventions which obviously were “not in the best interest of the children concerned”, and if the state party was willing to initiate discussions about legislation to stop them?

Replying for the state party the next day, Debora Gianinazzi of the Swiss Federal Department of Justice and Police (Private Law Division) from our perspective talked much but said little. Also the usual tendency of reducing the serious human rights implications of IGMs to gender-related aspects (while ignoring e.g. bodily integrity) was showing, for example when she claimed intersex surgery had lead to stark criticism “especially” when the “wrong gender” was assigned.

Nonetheless, the state party also made some quite remarkable announcements, for example that the Swiss Government would have taken the position of only allowing medically necessary surgeries first, with the Swiss National Advisory Commission on Biomedical Ethics (NEK-CNE) in their groundbreaking 2012 recommendations merely having rallied to the Gov’s position after the fact. Furthermore, on the order of the Gov, the Federal Office of Statistics and the Federal Office of Public Health would already collaborate to facilitate data collection (though obviously without consultation of intersex organsiations). When last commenting on data collection, the Gov repeatedly claimed it was impossible and “not advisable” to collect such data (as referenced in our 2014 CRC NGO Report, p. 46).

However, on the main topics of actively discussing legislation or even taking practical steps to prevent further unnecessary surgeries, as well as regarding the implementation of the recommendations of the NEK-CNE, the silence was deafening.

Fortunately, this concern was also voiced in a concluding remark by chair Kirsten Sandberg, noting the reaction of the Gov so far would not seem strong enough considering the ongoing surgeries.

So we’re hopeful the Committe will issue strong Concluding Observations (due to be published on 4 February)!