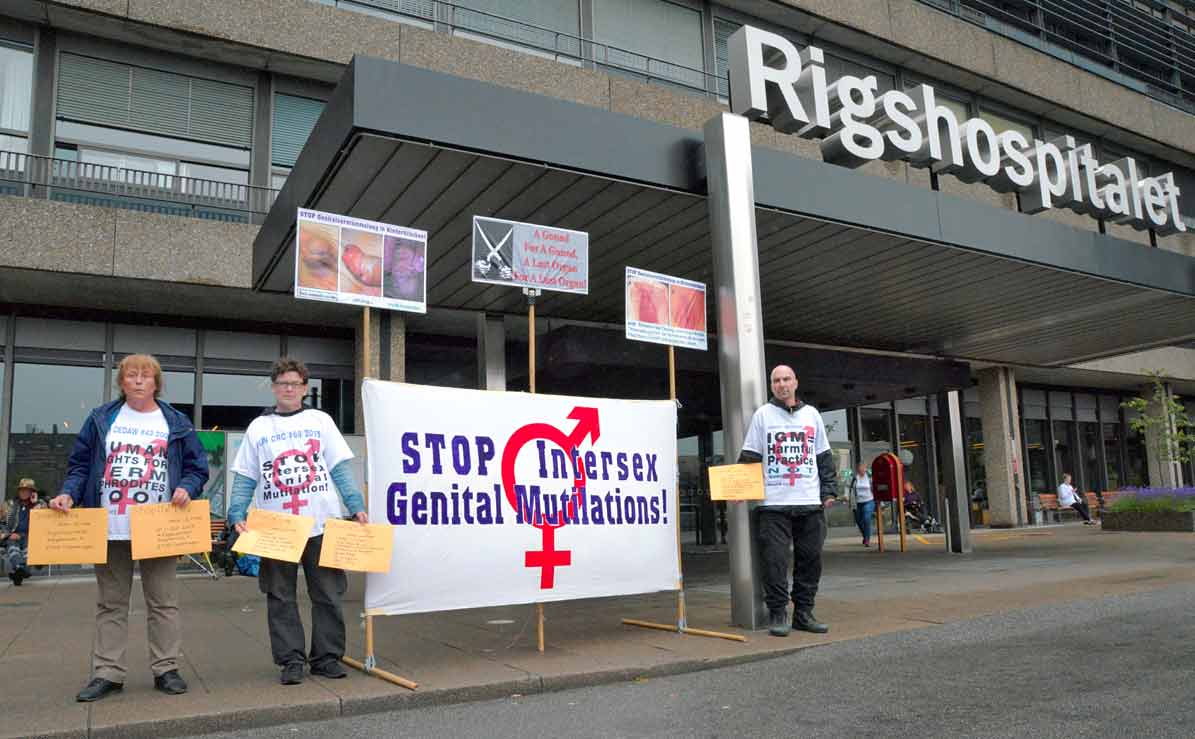 During its 76th Session in Geneva, the UN Committee on the Rights of the Child (CRC) examined intersex genital mutilation in Danish University Children’s Hospitals. The Committee’s now published “Concluding observations” dated 26 October 2017 (= Intersex Awareness Day) unmistakably condemn “ongoing surgical interventions on intersex children” the lack of “redress to the child victims of such treatment”, and the lack of “adequate counselling and support for families with intersex children” (CRC/C/DNK/CO/5, full reprimand + download see below).

On the same counts, Denmark has already been reprimanded by the UN Committee against Torture (CAT), which in 2016 condemned unnecessary genital surgery on intersex children as a “cruel, inhuman or degrading treatment” falling under the prohibition of torture.

So far, not only the Danish Government, but also most Danish National Human Rights Institutions (NHRIs) are still feigning ignorance of the human rights implications of intersex genital mutilation, or even continue to defend IGM, for example when questioned by CRC in Geneva:

Daniela Truffer (StopIGM.org): “Governments and parliaments must finally introduce effective legislation to end intersex genital mutilation on the public health system. Perpetrators must be prosecuted and punished. IGM survivors must get equal access to redress and justice.”

We particularly appreciate that the Committee unmistakably considered IGM in Denmark as a “harmful cultural practice” (art. 24 (3) CRC) – just like female genital mutilation (FGM) –, and explicitly obliged Denmark to

“undertake investigation of incidents of surgical and other medical treatment of intersex children without informed consent and adopt legal provisions in order to provide redress to the child victims of such treatment, including adequate compensation” (CRC/C/DNK/CO/5, para 24 (c))

24. In view of ongoing surgical interventions on intersex children, the Committee recommends that the State party:

(a)  Ensure that no one is subjected to unnecessary medical or surgical treatment during infancy or childhood, guarantee bodily integrity, autonomy and self-determination for the children concerned and provide families with intersex children with adequate counselling and support;

(b)  Develop and implement a child rights-based health-care protocol for intersex children, setting out the procedures and steps to be followed by health teams;

(c)  Undertake investigation of incidents of surgical and other medical treatment of intersex children without informed consent and adopt legal provisions in order to provide redress to the child victims of such treatment, including adequate compensation;

(d)  Educate and train medical and psychological professionals on the range of sexual and related biological and physical diversity and on the consequences of unnecessary surgical and other medical interventions for intersex children.