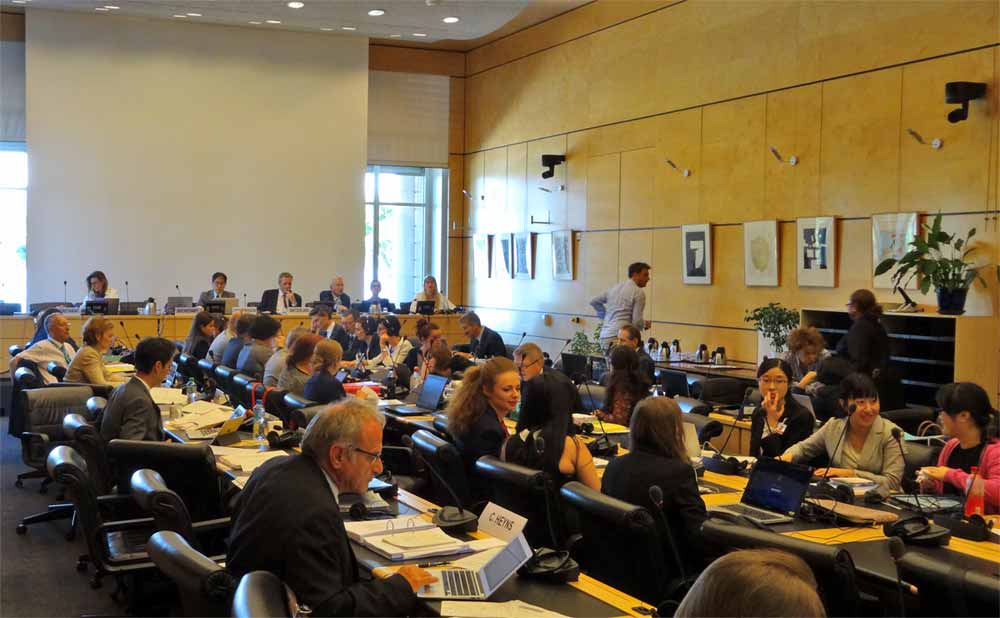 During its 120th session, the UN Human Rights Committee (HRCttee) as the Treaty body monitoring the implementation of the International Covenant on Civil and Political Rights (CCPR) was investigating Intersex Genital Mutilations for the very first time!

StopIGM.org / Zwischengeschlecht.org, in collaboration with Swiss peer and parent’s self-help groups Intersex.ch and SI Global, have been denouncing IGM practices in Switzerland as a violation of CCPR since 2014, with the Committee thereafter asking the Swiss State party questions on intersex and IGM in its List of Issues Prior to Reporting (LoIPR) under para 22. In their (non-)reply, Switzerland brought up the usual denial + pinkwashing in the State report (para 188).

Now, during the State review in Geneva, the Swiss delegation was questioned by the HRCttee experts. StopIGM.org was reporting LIVE fom Palais Wilson, hoping for tough questions on Intersex and IGM, and a first reprimand for IGM practices by the HRCttee (CCPR/C/CHE/CO/4, paras 24-25) at the end of the 120th CCPR Session!

«And then I want to ask, what is your position on so called “corrective” genital surgeries on intersex children, is there an official position of the country on that issue?»

«With regard of the government’s attitude regarding surgery involving intersex children. The Swiss government has publicly declared in a press communicate dated the 6 July 2016 that it believes that surgery must not take place unless for medical reasons it is absolutely necessary. By this we should understand that it is for the children themselves to determine, to take decisions regarding their sex. This is the attitude of the Swiss government, and resulting from that attitude, that approach, it is also provided for a facilitated process of sex changes and recording this in the Civil registry. In 2014 following recommendations based on human medicine the Civil registry adopted an official communication, sent out to all offices of Civil administration in Switzerland, calling that they adopt new practices in terms of of modifying registration, in particular allowing for, if there is a medical document stating that there was an erroneous registration at the time of birth. As I have said, these are official communiques and the Swiss government wants to go further. For this reason it is currently drawing up a draft bill codifying this simplified registration process for recording sex change in the Civil registry. Thank you.»

«Now issue no. 22 dealing with intersex related issues has been already largely covered by my colleague Mr Heyns, so I’m not going to go very extensively into this. I would just like to raise two points in that regard, one with regard to any practical information on any practical steps that the State party is taking in order to raise awareness among medical professionals and society at large with respect to this set of issues in order to prevent in the future unnecessary genital reassignment surgeries. We’ve been, it has been alleged to us that the State party does not provide adequate psychological support for intersex persons who have undergone involuntary genital surgical procedures in the past. Is this indeed the case? And more and finally what measures is the State party taking to provide access to intersex persons who have undergone such procedures to legal remedies and to ensure adequate compensation.»

«Thank you. I’ll answer two questions raised by Mr Shany on intersex children. To begin I’d like to say that Switzerland is aware of this issue. We’re concerned about it. Awareness raising among our citizens are of of the efforts taken in order to ensure that the right to self-determination is protected, as well as the right to mental and physical integrity of this group. We raise awareness through doctor’s associations, universities and patient’s associations. Mr Shany’s last question was on civilian actions seeking moral redress. As far as we know in Switzerland up to date there hasn’t been any civil case or class action case or payment in cash for moral reparations or redress in cases of sexual reassignment. Thank you.»