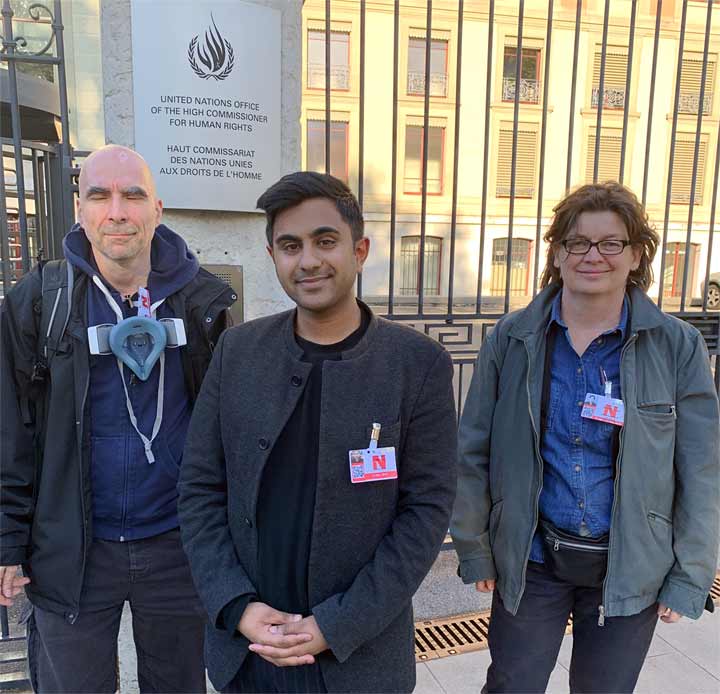 This week, the UN Committee against Torture (CAT) is examining the human rights record of the UK during its 66th Session in Geneva.

The UK Intersex NGO Coalition (IntersexUK, the UK Intersex Association and StopIGM.org) submitted a comprehensive NGO report (PDF) to the Committee, documenting serious human rights violations perpetrated particularly against intersex children allover the UK, and further briefed the Committee in a private meeting prior to the Session with updates and a powerful personal testimony by Anick.

In addition, also the Northern Ireland Human Rights Commission (NIHRC) included a section on IGM in its NHRI report (PDF –> p. 86) – many thanks!

Summary: During Session 1 of the UK review, on Tue 07.05.2017 a Committee member asked the UK delegation a question on involuntary surgery on intersex children. CAT has so far issued 7 reprimands to State parties condemning IGM as cruel, degrading or inhuman treatment (CIDT) falling under the non-derogable prohibition of torture. Wednesday 08.05.2019, it was the UK’s turn to answer the Commmitte’s questions. Hardly surprising, during Session 2 the government once more chose to NOT address the pain and suffering of the intersex children at risk, as first they’ll have to look way more into this eternally ’emerging and complex area’ ...

12:32h (Video @ 2:31:33): YAY!! Committee chairperson Mr. Jens Modvig asks a question about intersex children! Notes there is no evidence for past and current surgical procedures, which may lead to suffering comparable to ill-treatment. Asks about  government plans to ensure peer support and a “watchful waiting approach” instead of “early and irreversible surgery […] agreed to by parents […] in a very vulnerable situation” !

«On a different note I would like to ask about the role of the Government in regard to surgery of intersex individuals. Such gender determining surgery is increasingly controversial, in particular when it’s applied to infants. And to be frank, the scientific evidence for its long-term impact, particularly for its impact on quality of life, is absent, it simply doesn’t exist.

On the contrary, we hear in this Committee individuals often complaining that this type of surgery actually have very poor results, including genital pain, the need for many, many re-operations, poor sexual function and poor self-esteem.

So while of course we acknowledge that medical science progresses and that procedures that were used 30 years ago may be completely different and much more effective today, we are actually concerned that intersex persons have been and are still being subjected to medical procedures which, in spite of the available informed consent from parents, are undocumented as to the impact, longterm impact on quality of life and function, and where the results may create suffering which is comparable to ill-treatment.

For this reason we would like to hear if the State party has any plans to ensure a focused oversight over this area and that could also include for instance ensuring independent counselling of parents, and by independent I mean independent of the surgeons, for instance by adult intersex persons who have a large amount of experience to offer, and the introduction of the possibility of a watchful waiting approach, which is mentioned in one of the most recent scientific articles in this field. A watchful waiting approach rather than moving to early and irreversible surgery which by the way has been agreed to by parents who are in a very vulnerable situation. So why we may be on the edge of this convention’s mandate I would still be keen to have a reply to this question.»

16:23h (Video @ 01:23:47): Delegation member Ms. Angela Hawley (Policy Lead for Serious Mental Illness, Legislation and Justice, Department of Health and Social Care) gave a telling (non-)answer on intersex children, on the one hand claiming the government would now finally for the 1st time tackle this eternally new ’emerging and complex’ issue while at the same time hardly leaving any doubt that the government is hell-bent to continue with harmful surgeries on the infamous ‘individual case-by-case basis’ for as long as anyhow possible, without ever considering the suffering, let alone human rights of the children concerned …

«Yesterday the Chair raised the issue of treatments of intersex individuals. These are very often complex cases which can only been considered on an individual case-by-case basis. The Government is working towards ensuring that people with intersex characteristics can access the care they need. In England, National Health Service England are scoping the feasibility of commissioning a clinical pathway for affected children and young adults.

Best practice in the National Health Service is that all infants and adolescents suspected of having intersex characteristics should be seen by an experienced multidisciplinary team. Families should be assigned single points of contact to lead discussions with them and discuss options regarding immediate or delayed treatment with hormone therapy or surgery. Affected new parents, the child or adolescent should have access to specialist psychological support both during and after the diagnostic process. In addition, any affected adolescent who requires medical or surgical attention, should be routinely offered clinical psychological support.

In January 2019, the Government Equalities Office launched a Call for Evidence to better understand the experiences and needs of people in the UK who have variations in sex characteristics. This is an emerging and complex area of social policy and it’s the first time Government has launched a piece of work specifically looking at issues experienced by these particular group. The Call for Evidence is closed and the Government is currently considering the responses received. Thank you.»

(Coincidentally, on the same day also the Government Equalities Office issued a similarly telling (non-)answer to StopIGM.org’s Letter of Concern about Disregard of Human Rights Implications in the ‘Call for Evidence’ – see for yourself which (non-)answer is more openly about ignoring intersex human rights.)

Let’s hope the Committee will not have the wool pulled over its eyes – but will issue yet another strong reprimand for IGM to the UK after the Session!

>>> Intersex: How to Distinguish Medical Crimes from Health Care