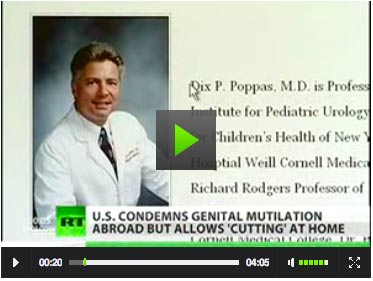 While Americans are outraged at the thought of female genital mutilation in Africa, practices just as shocking and unwelcome have been taking place in the US and have remained behind closed doors for years, performed not by a barber in a dingy backroom, but by a certified doctor in a respected hospital in Manhattan.

People like Janet Green, born with Congenital Adrenal Hyperplasia, also known as undetermined sex say the choice to operate, made by doctors and parents, was subjective in her personal case, as well as countless others.

“They have been experimenting on our bodies since the fifties, and they have to stop doing that as quickly as possible, because there are lots and lots, and lots of us telling them – it’s not working”, said the former patient.

Devore said the rate of suicides among young males operated on as children has been sky rocketing. He is now crusading for limiting surgeries to adults able to voice their consent.