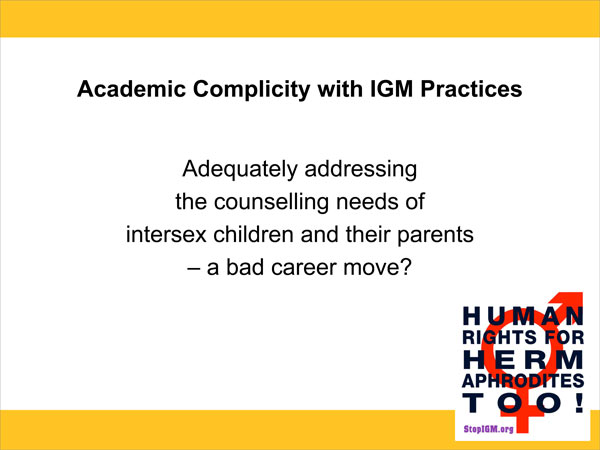 In the following I’d like to address a sometimes difficult or even painful topic, but one that I feel needs to be addressed, particularly at a symposium like this for scientists and researchers that hopefully want to do better than those who mutilated me and countless of my peers. I mean the topic of arguably mostly unintentional and unconscious complicity of academic intersex researchers with the perpetrators of IGM practices.

It’s an obvious fact that academic research on intersex is usually undertaken at universities that also practice experimental, involuntary, non-urgent genital surgery and other procedures on intersex children. And that also the non-medical research is often relying on collaboration with doctors or on medical data.

As a consequence, from my perspective academic intersex researchers tend to be hesitant about too openly criticising non-consensual genital surgery and other treatments, and adequately framing them as serious human rights violations. Because by doing so they would have to criticise their own institution and peers, and potentially harm their careers.
Nonetheless, in my experience academic research on intersex without acknowledging and addressing academic complicity inevitably leads to biased and skewed results which again constitute and reinforce academic complicity. 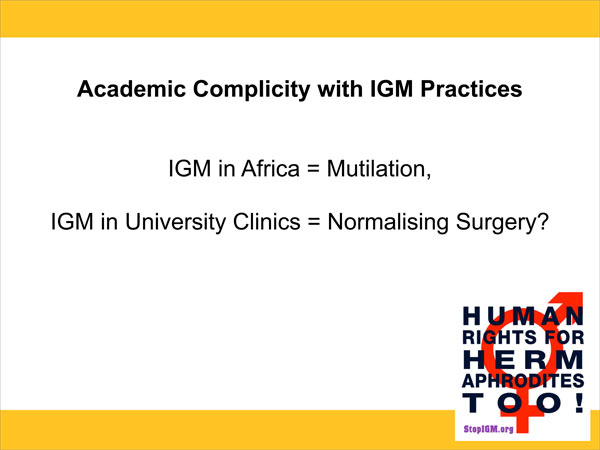 As a typical example, which shall remain unreferenced as it may be too close to home, and I would like the discussion to be about facts and mechanisms and not about persons, one typical example is when involuntary non-urgent genital surgery, sterilising and other procedures on intersex children in western clinical academic context are described as normalising interventions whereas the same procedures outside a clinical academic context for example in Africa are described as mutilations.

Or, when academic researchers address violence against intersex people, they only include mobbing on the street or hate speech and other things which mostly are experienced by LGBT but not by intersex people, while intersex genital mutilations are filed under health issues or health care.

At the same time, academic researchers tend to conveniently ignore that IGM practices also in health care settings constitute a crime that must be stopped by criminalisation and adequate sanctions, but instead propose to stop IGM by having academic discussions with the perpetrators. 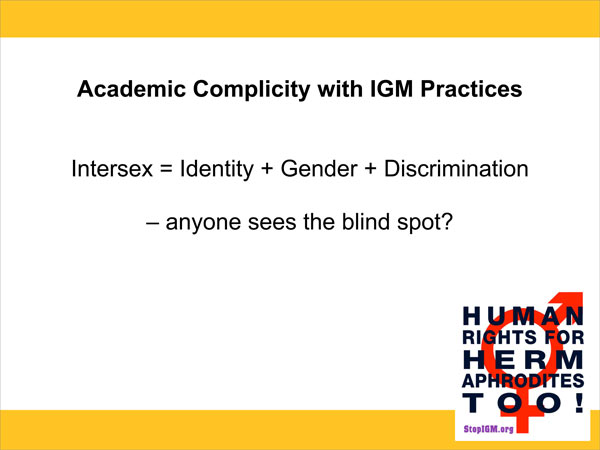 In addition, as Koyama and Weasel already established in 2002 (PDF), academic intersex research tends to frame intersex as a gender/identity/LGBT issue instead, while neglecting key human rights frameworks including harmful practice and torture, thus “potentially unintentionally perpetrating the invisibility and objectification of intersex people.”

Similarly, academic researchers too often don’t distinguish between mutilated intersex people and those who weren’t mutilated. Truth is, the vast majority of intersex children have been mutilated, but when it comes to intersex people being represented in the media and in academia, it’s usually the opposite.

From my perspective, these are seriously underresearched psychosocial needs of intersex children and their parents, and adequately addressing them would at the same time help to improve their quality of life and overcome academic complicity.