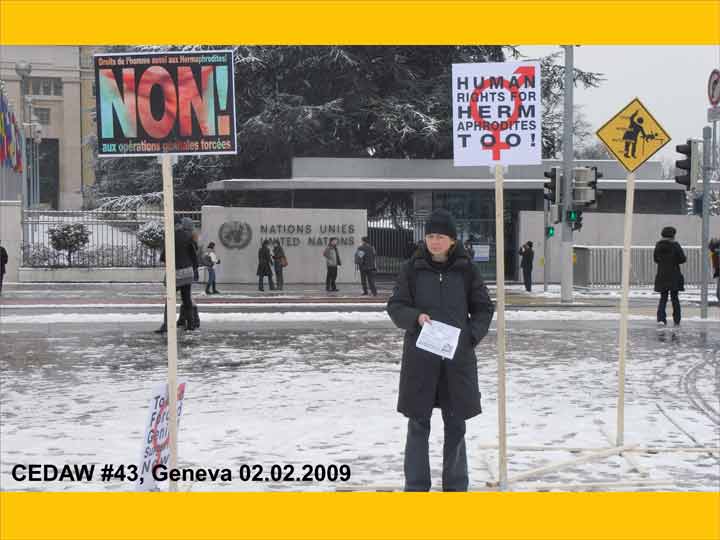 The 43rd Session of the UN Committee on the Elimination of Discrimination against Women (CEDAW) marked the first time that intersex people participated in a human rights mechanism. The German Association of Intersex People (ImeV), whom I served as a chairperson at the time, submitted a thematic shadow report, to which I contributed my personal story. And early in 2009, Germany was up for review in Geneva. The Committee seemed to mistake Intersex for an identity and trans issue, and didn’t even mention IGM practices in its recommendations, but at least it was the first Concluding Observations mentioning intersex. 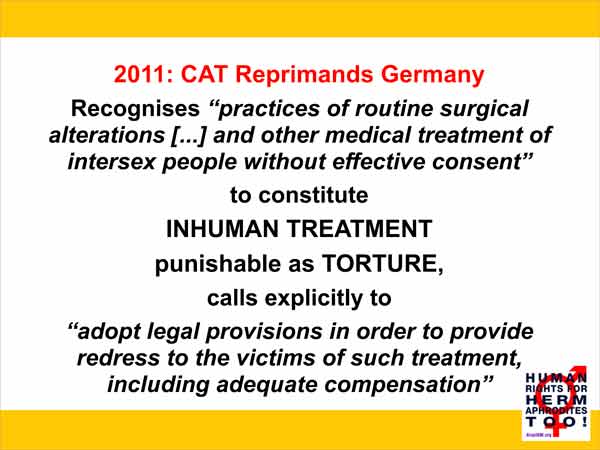 … who for the first time issued Concluding Observations on IGM practices, recognising them to constitute at least “inhuman treatment” punishable as torture under the Convention, and obliging Germany to undertake investigation of incidents of IGM and to adopt legal provisions in order to provide redress to the victims of such treatment, including adequate compensation.

Over the following years, the German Association and intersex organisations in other countries submitted more reports to various treaty bodies, but in most cases the Committees didn’t even address intersex in their Concluding Observations, and in no case IGM practices. 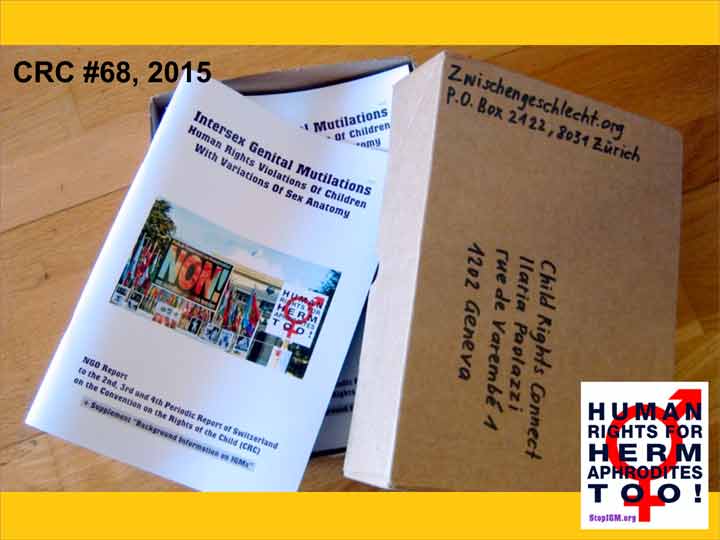 At StopIGM.org we felt the best strategy would be to first approach the Committee on the Rights of the Child (CRC) to make the case for IGM as a “harmful practice”. We therefore waited until Switzerland was up to be examined by CRC and submitted an extensive thematic report, providing detailed evidence of the ongoing practice, the lifelong severe physical and mental pain and suffering inflicted by it, as well as of the complicity of the State, supplemented by a human rights bibliography and a historical overview of hermaphrodites and IGM through the ages.

When the Committee then invited us for a thematic briefing before the session, it was suddenly in the air that our years of hard work might eventually pay off. 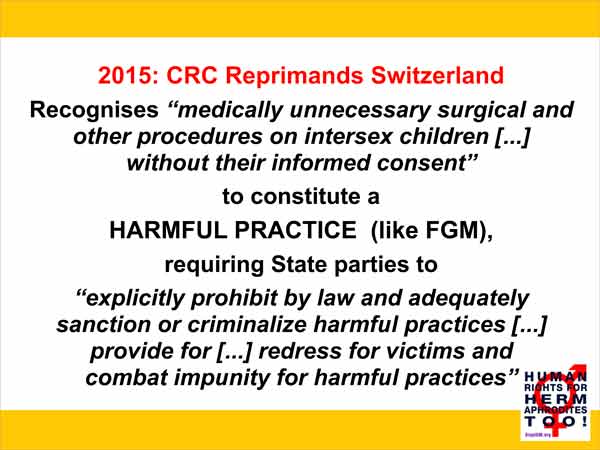 Despite that during the review Switzerland did everything to sidestep the issue, the Committee recognised IGM to constitute a “harmful practice” like FGM, referring to the Swiss National Ethics Commission (NEK-CNE) recommendations and to the CRC-CEDAW Joint General Comment 18/31 “on harmful practices”, obliging state parties to “explicitly prohibit by law and adequately sanction or criminalize harmful practices”, as well as to “provide for redress for victims and combat impunity for harmful practices”. 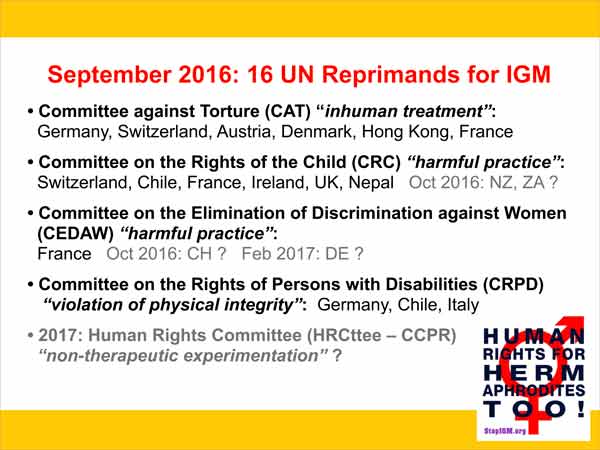 During the CRC briefing, a Committee member asked if we would also consider writing reports for other countries. In collaboration with international members of our NGO and fellow intersex advocates and organisations, we’ve been continuously submitting reports since, to this day securing 16 reprimands, each time recognising IGM as a “harmful practice”, as “inhuman treatment” or, in the case of CRPD, as a “violation of the physical and mental integrity”.

Even better, by the end of next week or soon after we are expecting two more reprimands by CRC, and one more by CEDAW by the end of October, and even more are already in the making.